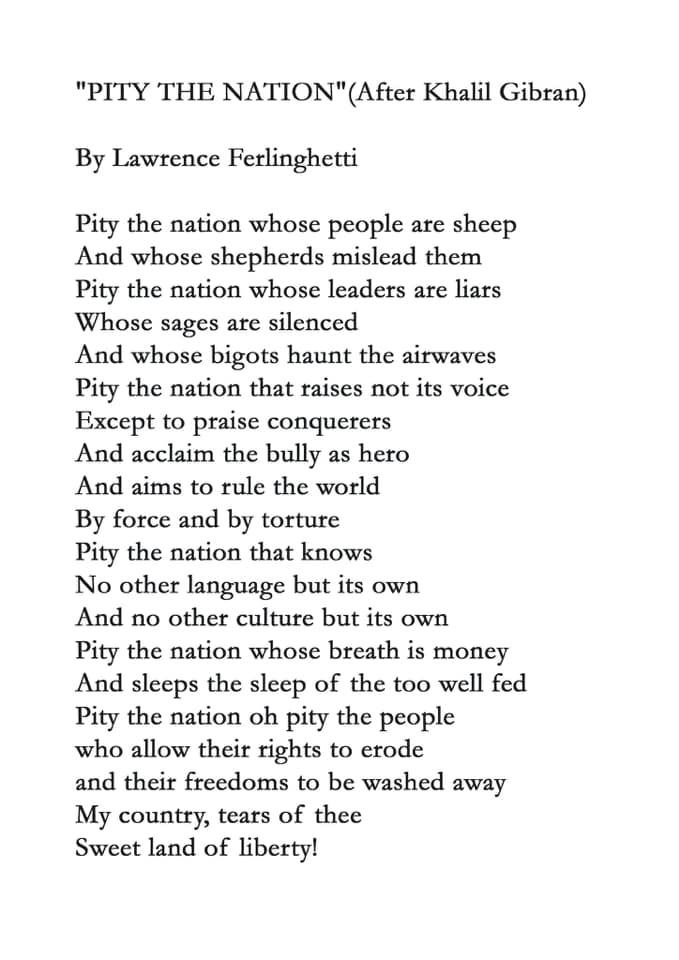 (modified one more time from Khalil Gibran and Lawrence Ferlinghetti

Dr. Seuss portrayed a brilliant philosophy on many topics. I marveled the other day at his insight. His drawings of animals and people were not my favorite types of characters – no big eyes and darling smiles, NO, I surmise that he deliberately made many of his characters without 1) gender 2) race 3) beauty 4) and seemingly deliberately made them kind of “ugly”.  A perfectly wonderful tactic to remove those social triggers from his books, giving the parents and kids to reflect on his philosophical statements without their own bias, feelings of discrimination, and reverse discrimination.

He used minimal colors….. not making the few people he drew as having a “color”, no big noses, no almond eyes, no curly hair, no blonds.  While it was expensive to reproduce color images in the era of his books, this too was a good way to avoid his real messages from being mired in the muck of prejudice and supremacy and discrimination and religious and cultural and gender biases.

He was a gifted communicator, brilliant.

So i have redone one of his masterpieces…. ha ha..  in the vulgarities and profanities of today.

“It’s a crappy-ass world
and all the nut-cases in it
are mired in muck
every “effin” minute
I’m breathing relieved
believe it or not
for the wakos and stink holes
I’m lucky I’m not.”

When i googled early cartoons of his i was a little dismayed to learn that he worked for Standard Oil Company making adds for their Flit, chemical insecticide spray 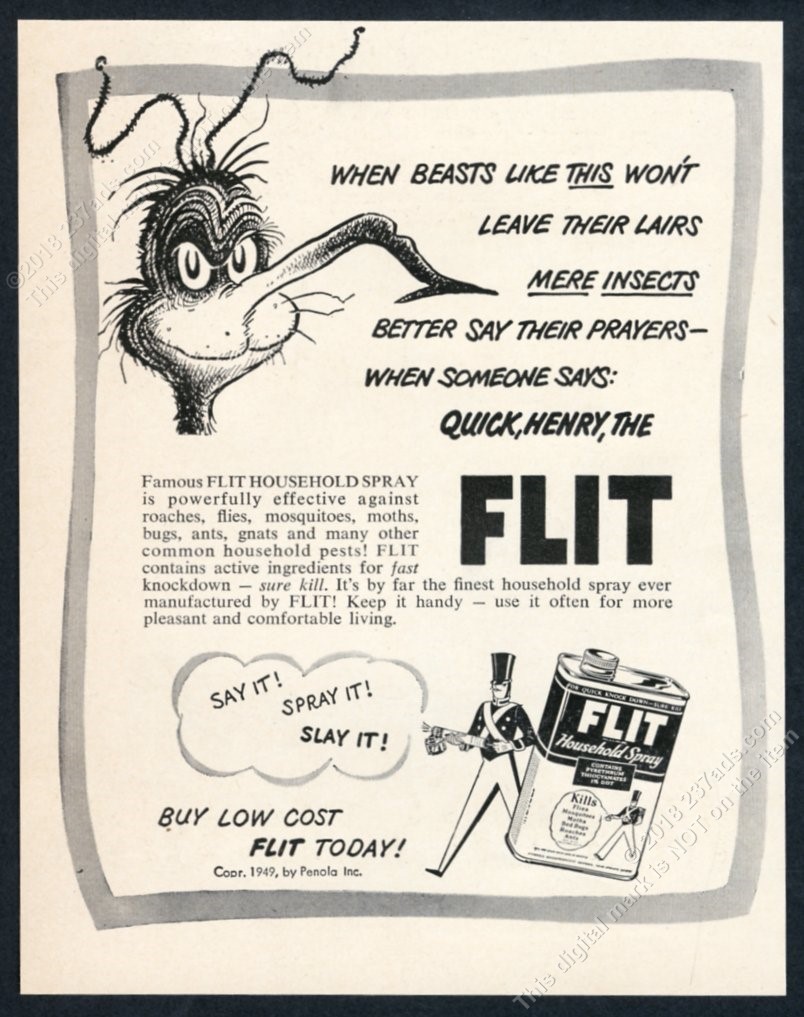 . This may have been one of the reasons that his later books had environmentally relevant topics.  (formulation contained 5% DDT in the late 1940s and early 1950s, before the negative environmental impact of DDT was widely understood.)  We may come to our senses, as apprently he did, later in life.

Then comes this post….. yes, we all start out somewhere.
This was indeed a time when technology was alloed to maime and kill indiscriminately (and discriminately), research was done on live human beings and nuclear power was thought to be harmeless. So here is a quote from that link —
“But Geisel, like all artists, had to start somewhere. Eric Carle, who created 1969’s “The Very Hungry Caterpillar,” joined the children’s book world only after author Bill Martin, Jr., reached out him, impressed by a clever lobster illustration from his Chlor-Trimeton allergy tab adverting series. Shel Silverstein worked for decades as a “Playboy” magazine cartoonist before he published his beloved G-rated rhymes for children in 1974’s “Where the Sidewalk Ends.””

The bottom line, again, speaks to a man who was thoughtful, perhaps ignorant of chemical carcinogens and pollution in the beginning, began speaking agains racism, inequity, beaurocracy, and environment.

“…as time went on and these things became known, he changed…”

I see my changes in the last 75 years, similarly.

In order for America to be Made Great Again, America needs to have been great at some point in history. Take a good look at our history.  Anyone who has even the slightest knowledge of America’s history, and anyone who has even a modicum of information of the interference America has had in world politics, and even a hint of the simply self serving acts of previous political and corporate machines in America, knows that America has never been that GREAT. Yes, America has participated in some good things, but also many bad things. 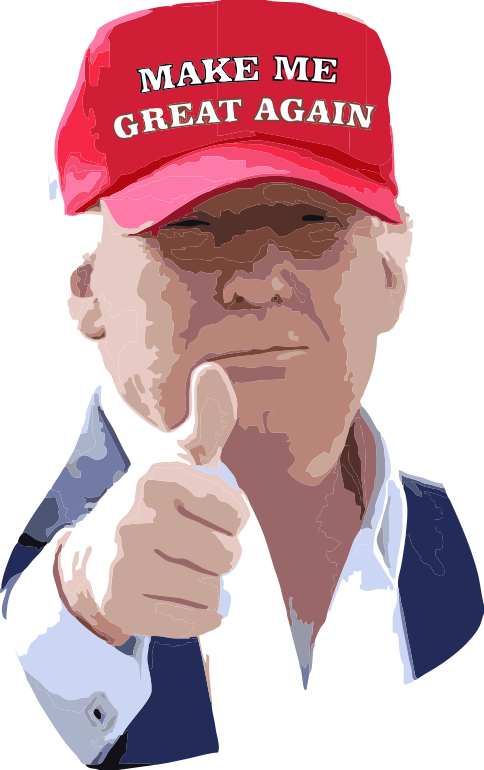 To be Great Again, one must have already been Great.  Looking into the psychology of anyone who adopts the slogan MAKE AMERICA GREAT AGAIN it is clear it must come from a position of emotional and physical insecurity, thinking they are “lesser” than they were at some point in their lives.

Case in point…Mr D. Trump, President. These words are a projection of you, onto your past (which you thought was great but was fraught with mistakes, bankrupt businesses, broken lives, and dreams) and your present (which is totally and undeniably lacking, you feel the loss of testosterone and energy and appeal) and you think the American people will “make you great again”.  Your lack of introspection, comprehension, and insight is unbelievable. For you to think you will be great AGAIN having never been great, riding on the backs of a similarly dissatisfied and disgruntled populace.  It is really beyond funny, and sadly, your supporters do not understand how you are using them for your own glory.

Twitter and Facebook: I was interested in a nice little pair of words that i heard in a YouTUBE video by Jordan Peterson and Ben Shapiro: Religion, Trans Activism, and Censorship: that these media platforms are just ego boosters. It is pretty apparent that these in fact are that–instant ego gratification platforms when one can look and see who likes you or agrees with you. They are not profitable conversations, they allow explusvie, anonymous blurbing. BUT they do stroke the ego. The intercourse is not really a conversation with another human. It is binary, polarizing, and splits groups into opposing moral, social, intellectual and political views (binary, ok whats new in the universe) that profit no one. (here is one opinion on the topic)
The ego-boosters and the ego-busters (words coined by Dr Suzanne Gaddis) are great names for the Democrats and Republicans. Haha, very little is exchanged on these platforms, in anonymity that benefits the world.

TAKE HOME MESSAGE: todays twitter and facebook platforms allow both ego-boosters and ego-blasters anonymity while engaging in self-aggrandizing self-ego-stroking. This may amount to braingasm (what a cute word).

From my friend DWN.

Here is a list of natural causes that affect global atmospheric temperatures:

“Human activity” contributes something, but the effect is well under 1%, i.e. it’s not statistically detectable. (Yet. Could be in 100-500 years.)

If the human brain is not fully developed until age of 25 (give or take a year)(that is, it is not developed enough to have full executive, or full cognitive restraint functions)  WHY CAN CHILDREN OF LESS THAN 14 be allowed to have long guns, and any kind of gun in most states by 18.  This makes no sense to me.
I found this fantastic site. called GunPolicy.org which is run by the University of Sidney, and deals with international data on gun deaths. The graphs below I just did quickly to compare where I was born, with where I live now. You can see that the US has a big problem, but not as big as south of the border, but way in excess of the western european countries. The takeaway message can be many things.

-we need to change gun policy to fit american’s brains… that means, treat kids like they are really just that…. kids,

-we need to do some statistical analysis of WHO does the murdering….. young, adult, old, mentally unstable, or deviant…  and change the laws to match 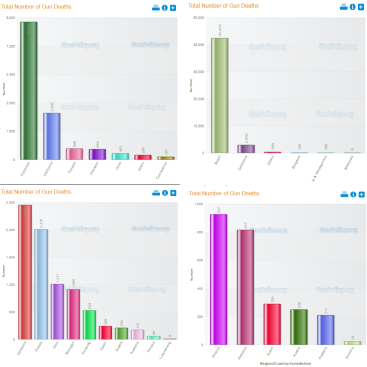 Ha ha…. I don’t think there is much chance that donald trump is on the short list for the nobel peace prize. I seriously wonder if MRI would detect a missing frontal lobe. 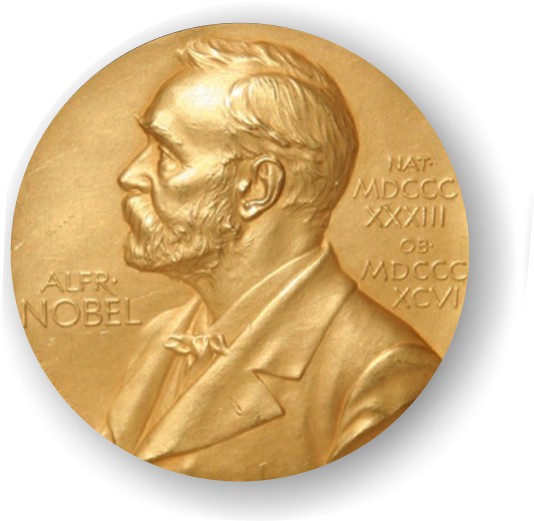 This made me laugh so hard i boosted my immune system for a full week.

….Actually, throughout my life, my two greatest assets have been mental stability and being, like, really smart. Crooked Hillary Clinton also played these cards very hard and, as everyone knows, went down in flames. I went from VERY successful businessman, to top T.V. Star…..

I think overall the health of all americans will improve just because we laugh at your tweets.

“Back in November, presumptive GOP nominee Donald Trump revealed his conviction that he has “the world’s greatest memory,” a declaration he announced is “one thing everyone agrees on.” Now, he can’t remember saying that.”