same MO. See from bottom image that just one of the dodecamers (number 42a_aka_44)  had any missing values, and then just 1. So the separate sum (172 with and without that one missing value) is listed in the top image, along with the summary of just the means of the four dodecamers calculated separately) and the single dodecamer with one missing value is the very bottom set of valley parameters. 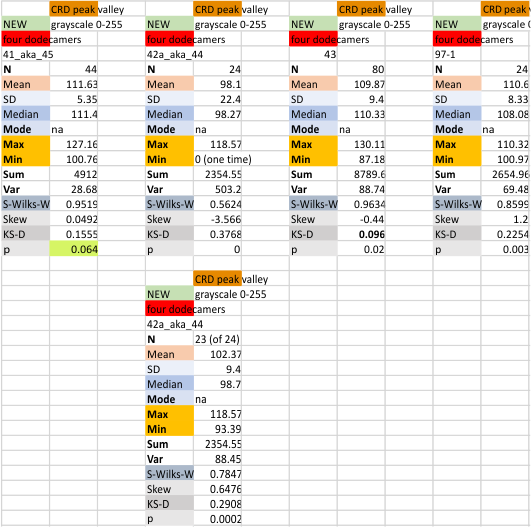 same MO as before, 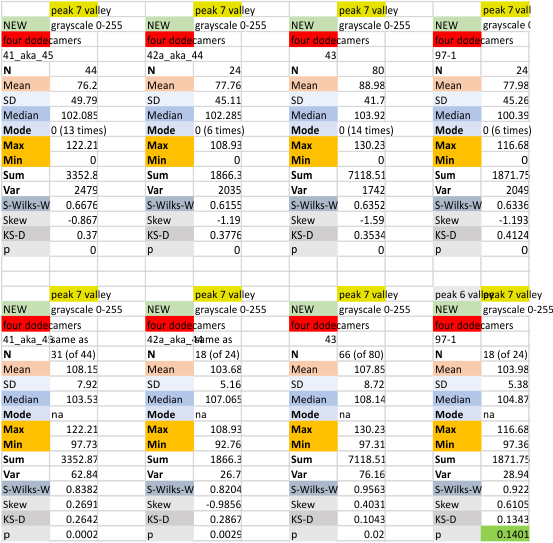 same MO as before. 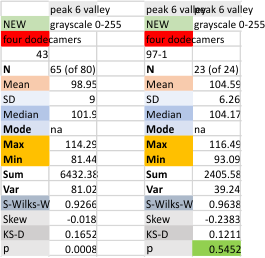 SP-D peak widths, heights and valley values for four dodecamers. These are the data for peak 5. (count begins with peak 1 as the N term peak and moves toward the CRD, each for trimers.

When there are peaks which are “not detected” a value of 0 was used, and data were plotted both ways, i.e. with the non-detected and eliminating the non-detected). The pattern was applied to all peaks as one dataset, and to individual dodecamers (N=4) – see bottom image. 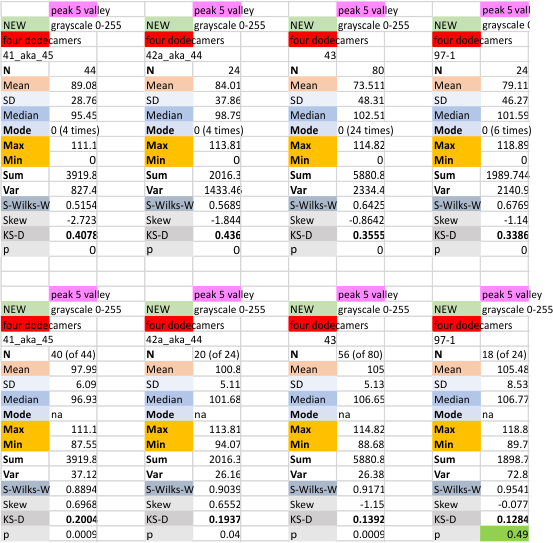 The peak just lateral (remember going to the right and the left of the N term peak with peak 1 being counted as the center N term peak), peak 4 is a very consistent finding with image and signal processing. You can see top image shows that only once in 172 plots of trimers was there no detection of peak 4. Means and other data are shown both ways. The image just below that is the mean grayscale valley value for peak 4, calculated as an N of the number of dodecamers examined, and the N of plots is not the same in the dodecamers, but each dodecamer is given the same weight in those means and SD.  With and without the single missing value in one dodecamer, means are very close, that is grayscale value of 112. The third image down shows the mean grayscale value for the peak 4 valley for each of the four dodecamers individually (these were used for the means shown in the second image from the top). Lastly the single dodecamer where a single peak 4 was missing is shown at very bottom). 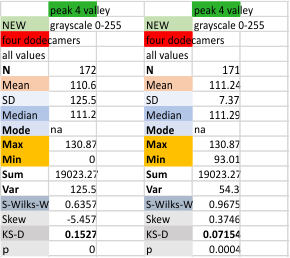 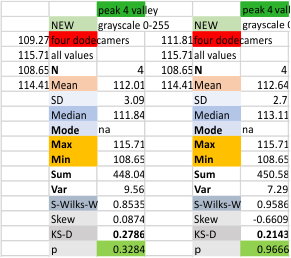 Grayscale values(0-255) the y axis. Glycosylation peak was detected by image and signal processing algorithms 100% of the time, so there is a single value recorded for the valley (immediately lateral to the “tiny” peak – keeping in mind that this molecule has bilateral symmetry beginning in the center at the N termini junction peak. so many images of this molecule have been posted on this blog that they shape of the AFM images is easy to see. 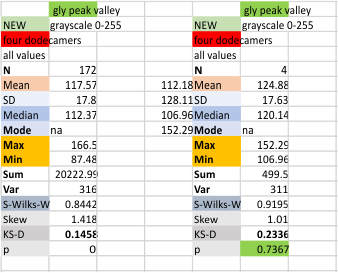 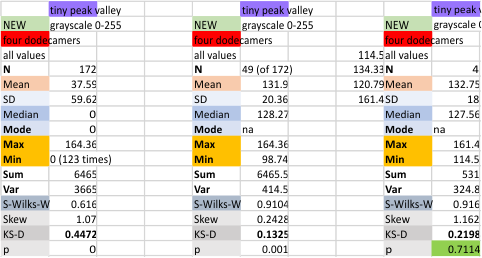 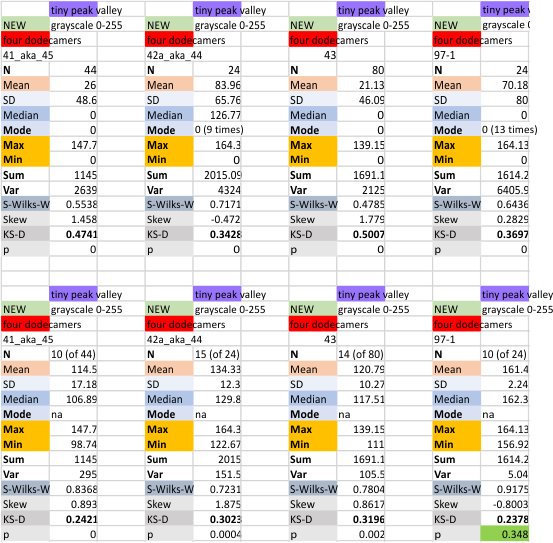 The peak height has been found, the valleys on the side of each peak progressing to the center (inward sid of the peak, coming from the CRD toward the center, thus the right hand side of the left part of the image, and the left hand valley side coming from the right CRD meeting in the center where the N term peak is. This means that each trimer valley value is taken from the side directed toward the CRD while all other valley values are on the side of the peaks nearest the N term peak.)  As recorded for widths and peak heights, the valley height is measure both in all the separate trimers (N=172)  and then again, using the mean valley height from each trimer (N=4) 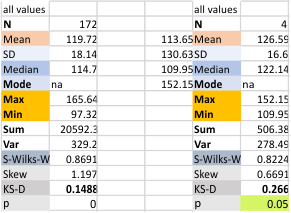 Plots of SP-D trimers (as hexamers) with the N term peak becoming a whole peak (not just a half peak as the molecule would suggest happens..this done for ease of calculating thus each shows 15 peaks per hexamer (an odd number) or 8 peaks per trimer.  Using many plots ( grayscale plots obtained in ImageJ), peak heights are being determined for each peak set, and these data are for peak 6, as yet unnamed but present at least  90% of the time in this dataset —  100% of the time in the plots for two molecules, 95% in one molecule, and 82.5% in another).  Using just the summaries for the four dodecamers (without the missing values) the peak height for peak 6 is 115+/2.6  Screen prints from excel are below. 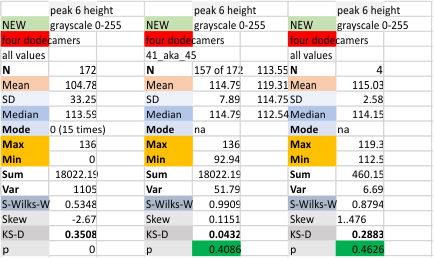 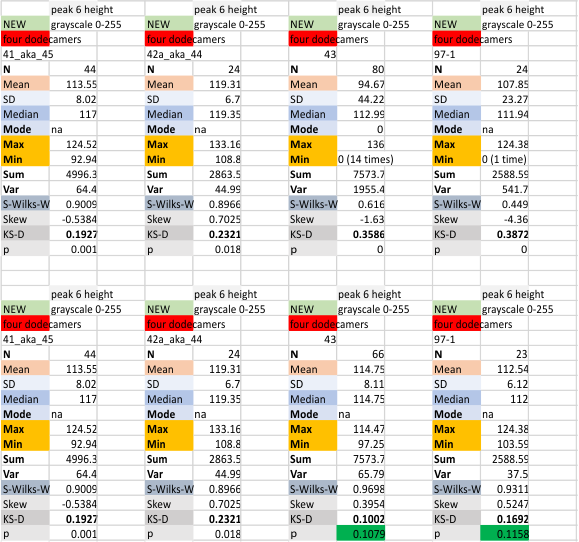 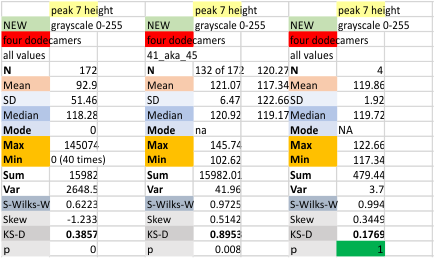 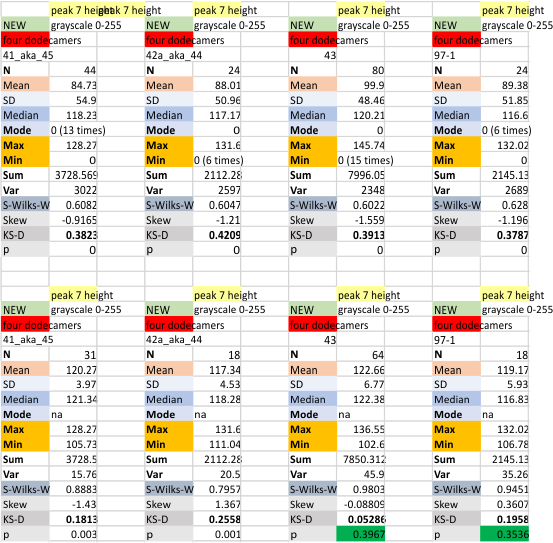 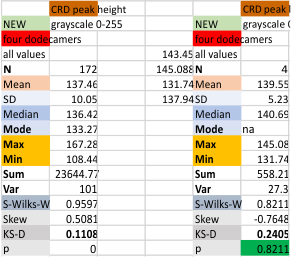 Previoius values for the width of the center N termini junction of surfactant protein D dodecamers (from AFM images published by Arroyo et al), comprised a large dataset, hundreds of plots, four different dodecamers and the means for N termini peak width and all the other peaks (8 per trimer) were posted as well.  In this new dataset, the Gwyddion processed images were not used because of the huge differences in grayscale values (Gwyddion exports as R, not RGB, and I assume that is the reason – at least I could not figure out how to export images processed in Gwyddion as RGB). Some plots were used in both datasets.

Also, the very far out image processing filters were eliminated, and the new set really is focused on 5 and 10 px gaussian blurs, very little else. ( i can make a list if someone would like it).  Also, instead of hundreds of plots, there are many fewer, but very surprisingly the data from the big set of grayscale plots, and this abbreviated set are so close, that I think there is no reason to plot and process every image in all permutations and combinations of signal and image processing.

Comparisons are below…. listed as old and new, for the whole column – for the individual dodecamers (listed by name as 41_aka_45, 42a_aka_44, 43, and 97-1 — designations only for record keeping), and again, with an N of 4, using the N termini width for each dodecamer individually.

The n for the N termini peak width values duplicated…. a complete N width for each trimer, so the actual n is “half” that (see the (/2) notation on the excel images. 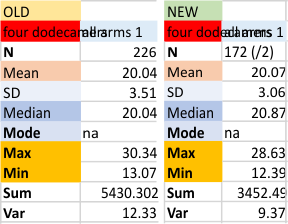 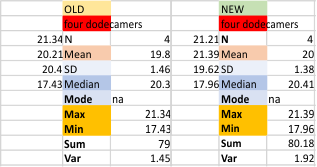