This excel peak finding template (Thomas O’Haver) was easy to use to find peaks, though I personally found that peaks that I deemed to be background were typically found, while one tiny peak that I find in many images was constantly overlooked.

My counts from both the image, and the individual plots in ImageJ were about 15 peaks per hexamer, where here it was 19.25 +/- 0.82.  The N is small but there was not much variation when i used different settings. Only one image was processed, using 0.6 as the amplitude threshold and either a slope threshold of 0 or 1 (thus four hexamer (arms, CRD to CRD with N peak in the center) were measured. The PeakValleyDetectionTemplate, using this same image processing combination, that is, gaussian blur and limitrange 100-255 in Gwyddion, also produced a large number of peaks (see previous post).

The more appropriate setting for the PeakValleyDetectionTemplate was used on a single image of 41_aka_45, and that was AmplitudeThreshold 0.6, SlopeThreshold 2.5

I have more peakfinding results using other SP-D dodecamers, but just one of the dodecamer I have called 41_aka_45. 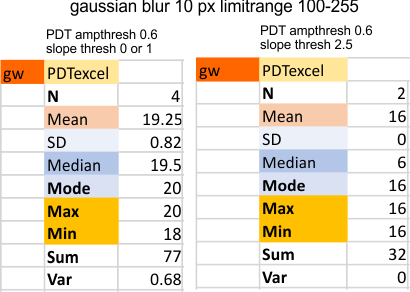