Four dodecamers of SP-D, plotted in ImageJ, with and without gaussian blur, limit range image processing, and processed again with signal processing algorithms to determine peaks per hexamer.
Applications were – No processing or gaussian blur (5 or 10px) and gaussian blur with limitrange (100 (or above)-255), and each is then subjected to all of the following signal processing applications for peak detection: Lag 5, Threshold 1,  Influence 0.05 (batch process), Scipy (Prominence 2, Distance 30, Width 5, Threshold -, Height -), Octave, autofindpeaksplotx,y and iPeaksM80, and excel template PVDTxlsx smooth 11.
Four dodecamers were included in this set of numbers below…. analyzed as a total input, and as an N of four. Not a big difference.  This number is not too far off the extensive search for peaks in just ONE dodecamer (which was chosen for its microscopic appearance), where the peak number per hexamer was about 15, 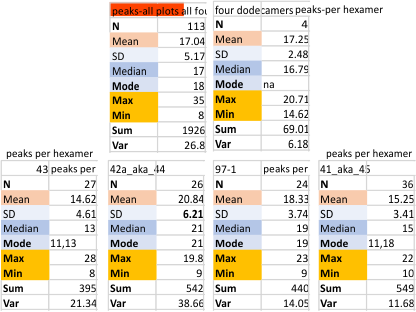