I havn’t read much (or found much to read) about the making – breaking – moving – adjusting of desmosomes, or the energy requirement for desmosome modification, but it seems too much a coincidence that mitochondria would be closely tethered to desmosomes and not provide this function. That said, they have been photographed by me in mouse, rat, neonatal rat, ferret, hamster, syrian hamster, dog, and guinea pig, just to name a few in the list that I have looked at in the last weeks. And they are so similar in all, that so far, if i list one image of a desmosomal-mitochondrial junction from one species I cannot tell it from another. This is good, i guess, but it would be more interesting if the structure showed some variation in structure….. that could perhaps be correlated with differences in the component proteins.

Here is one desmosomal-mitochondrial junction from ferret, which didn’t have a nice even pattern of cadherins in the middle, but did have a punctuated central line…with dots less than 20nm apart…. they seemed a little staggered.  Here is the original micrograph (i removed a scratch in the negative not in the area of the desmosome using photoshop bandaid tool, but it otherwise just a scan of the print. 5940 18648 ferret hepatocyte.

The image below it is an enlargement of the box in top image. Ribosome-red dot for size, and the black lines overlie densities in the intercellular area of the desmosome. 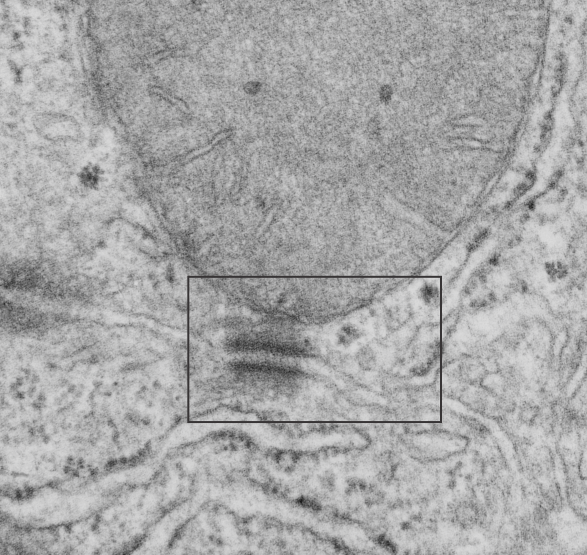 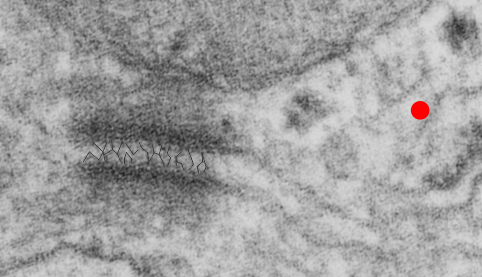