There are some ultrastructural characteristics of this desmosome which are interesting. Having a desmosome sectioned opportunely is hit and miss.  This particular section has some structures that look to be the correct size of intermediate filaments that are trailing off the the upper right under the mitochondrion, and there are definite light-dark-and dotted portions of the desmosome (in and including the plasmalemma portion) which have a distinct vertical repeating pattern.

I squeezed the micrograph bottom to top to determine if this was just a shifting of the image during photography or whether these vertical striations would still be visible when i removed (in photoshop) that kind of vertical shift.  The answer was that even then the spacing and the effect of the alternating light and dark areas in the cell membrane portion of the desmosome remained.  Red dot=27nm as determined by ribosome size, and thus the alternating dark and light vertical areas in the section are about 10nm in width. 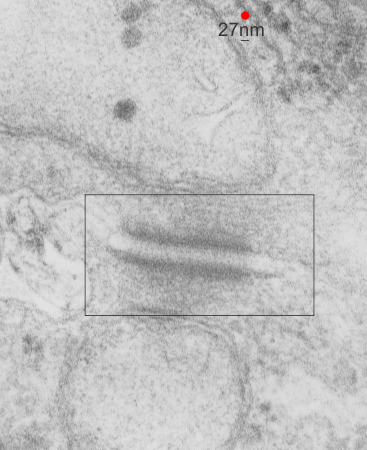 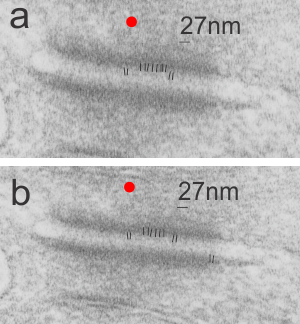