It seems to me that there is a pattern of thickness  changes(width or height if you wish… because of the orientation of the diagrams below) and the rigidity of the plasmalemma inherent in the desmosome (likely due to the transmembrane parts of desmoglein and desmocollin ) and that rigidity includes a specific intercellular space dimension. I have seen this published at about 34-38 nm (that is, from the inner leaflet of the plasmalemma of one cell to the inner leaflet of the plasmalemma of the adjacent cell) to be something on the order of 38 nm.  Using that dimension, if i measure from inside plasmalemma of one cell to the adjacent cell and compare that to the width from the same places in the 200 nm ring or annulus around the desmosome there is going to be a change in the dimensions (which i could measure as just a few nm greater than that within the area of the desmosome proper. And, then a reduction in the intercellular width (per the more routine proximities of two cells) which becomes something like 40 nm.

Here is an article which suggests some dimensions for the desmosome, but does not address adjacent variations in the plasmalemmae including the anulus.  You can compare with two images and measurements below. Keep in mind that the two images below are not derived completely randomly, as I picked two which had substructure which was clear enough to measure.  The annulus of these two desmosomes is indistinct, and longer than that seen in other desmosomes. This likely relates to the plane of section on a perpendicular axis of a round desmosome and surrounding annulus (the latter being increasingly seen as one sections nearer the periphery of the actual desmosome). 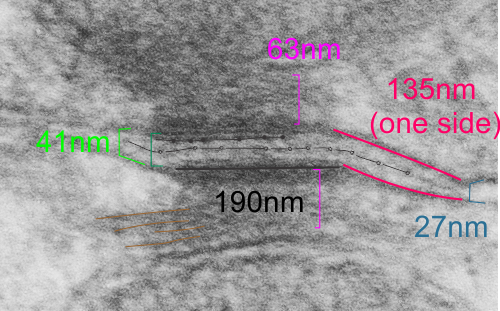