Thank you to all of you that posted questions on “why CorelDRAW x5 suddenly began to work so slowly”…in fact it was working so slowly (as were some other programs) that it was totally unmanageable.  Just to open a file took about half a minute. 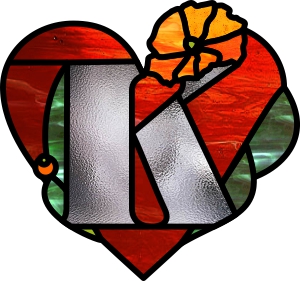 It took some searching, but from those posts I found out how to access “temp” files and saw that i had about 200,000 temp files (woa) some were very large, and with the cute little trick that a few of you posted, i.e. using %temp% in the windows window…. i deleted them all (i guess deleting temp files requires the temp file folder because the more i deleted the faster deleting them became — go figure) and now CorelDRAW x15 works just like new.

CorelDRAW — which my first version was given to me on 8 or 10 little pink floppy discs –version 3) and I was immediately hooked, and I found it more intuitive than Illustrator.

I use CorelDRAW for making stained glass patterns.

In praise of CorelDRAW i found it so forgiving of other software (those others with obviously built in protectionism) it was open and compatible (same with WordPerfect, way better than Word back in the day) with competitors. Even after 25 some years, I have not explored its potential — but think the drawing in symmetry feature in x8 would be awesome to have.  Maybe I will move up someday.

The pretty good export to pdf is what I have used in science, and in my own website business…  I am just saying “thank you” to the program and those who use it and figured out how to take care of some tasks, how to create macros, how to make keystrokes, etc and post that info online for the rest of us.