Not much text with this post, but here is a highly simplified, not real detailed, summary of what some think about mitochondrial cristae morphology. This is very basic, i intend to make some really nice diagrams including the inner mitochondrial membrane proteins as represented in 3D by the protein databases. That will include the OSPHOS proteins, and the channel and transport proteins and the cristae junction proteins.  But for now…. and blatantly missing several types of cristae (triangular in particular) here is a line diagram of cristae and some associated properties. The electron micrographs on the “aerobic” side of the diagram are from various images of hepatocyte mitochondria just cut out of existing micrographs, on the anaerobic side, the mitochondria are selected from isolated mitochondrial fractions. Both are traditionally prepared TEM processes. Abbrev: IMS, inter-membrane space; white rim area. Outer and inner mitochondrial membranes=black lines. Grey interior= mitochondrial matrix. Micrographs, not all the same scale, 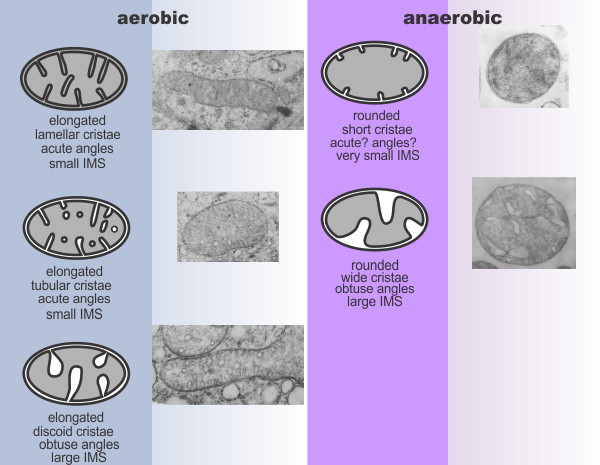 While i love the tomographic 3D reconstructions of portions of the cristae, it seems that this is sort ofwhat most of us rendered in our minds before those data confirmed the structures.