Here is an awesome video… loved it.  I was searching to find the approximate dimensions of clathrin… to see if a vesicle in one of my own micrographs possibly had clathrin protein… the distance between little spokes radiation into the center of the vesicle was approximately 60nm +/- 5nm  and I found this really remarkable movie.  And i also commend that it is freely shown, and very colorful.

At the same time I continue to find TEMs from some dude in Germany whose research was very likely funded with public funds there but who also seems so insecure that he needs to “tag” that property (belonging to everyone in the world and very likely paid for by government funds) as his own… what a small mind he has– totally small and self indulgent.

So here is the little structure I measured the proteins in….  maybe clathrin, maybe not. Measurements based on ribosome size in THIS micrograph assuming mammalian ribosome is about 27nm in diameter.   Distances between radial arms is about 60nm. Micrograph is from a 50 day wc/ii mouse. Black rays indicate location of inward projecting densities and distances between those lines at the perimeter of the vesicle were measured. A portion of a mitochondrion is on the left. Ribosome size is shown as red dot. 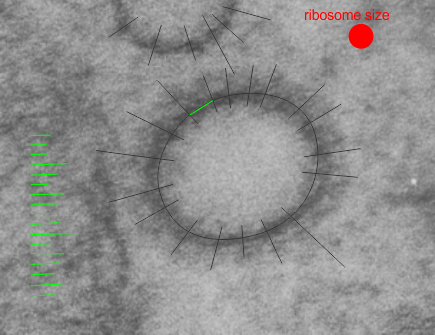