I got into searching for the structures of clathrin, COPI and COPII and one website visit after the other led me to this link. There headline was “Globular glycofullerene molecules prevent virus from evading immune system and entering cells” and I got goosebumps when i thought to myself that the surfactant protein A and surfactant protein D fuzzy balls might very well act as these proposed superballs in inhibiting infections from those viruses which have developed the reverse method for “entering” cells and avoiding the immune response (ebola and HIV for example).  Seems a really fun thing to research.  I posted a picture of what i designed as a surfactant protein A fuzzy ball (surfactant protein D makes fuzzy balls as well) and immediately saw the similarities between the octadecamer glycoprotein protruding  in a sphere in both these fuzzy ball naturally occurring innate immune functioning proteins and the one that was produced by synthetically.  Nature figure it out first.

BTW i dont like how the EBOLA virus is tangled within the backdrop of the globular glycofullerene on the left, called a  “superball”,  in fact it is kind of “nonesense” to me…. I could however envision the EBOLA virus stretched to oblivion as if stuck to a round velcro sphere, with areas exposed for digestion and removal.  It has been stated that EBOLA type viruses (EBOLA is a “Filoviridae” virus and older than previously thought). That group of viruses has been interacting with mammals for several between 5 – 23 million years and it makes perfect sense that some sort of defense mechanisms have arisen in parallel. In fact a little bit of searching shows up this reference on filovirus entry. 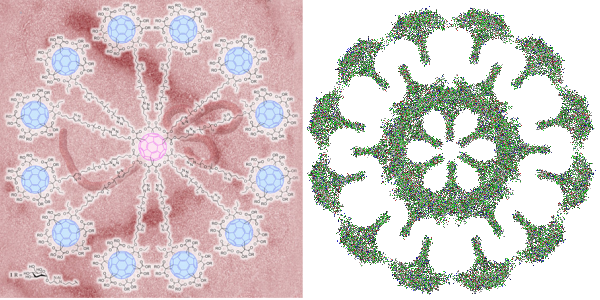