I have looked at literally dozens of diagrams of SP-A and they just are repeats of the initial diagrams put out by the labs that investigated surfactant proteins early on. I am assuming the earliest came from this institution, Whitsett’s lab, but I am not going to spend the time to check.  Owing to the basic premise, certainly not unique to anyone in this institution alone, that the diagrams don’t matter as much as the science… i think that the dimensionality of the SP-A bouquet has been lost, most likely due to the lack of care in the production of the “diagrams” which accompany papers.  In fact the angle of the neck – CRD portion of the bouquet trimers has two configurations, open and closed, according to some researchers.  I will post the mean+/-SEM of the angles typically used in diagrams, vs what is actually measured in transmission electron micrographs.

Just a word to those preparing scientific illustrations – one does a huge disservice to perpetrate erroneous diagrams.

While on the topic of diagrams, why on earth do people keep representing the CRD of SP-A and SP-D as ovals, arranged like little tulips. THis is just lazy.  The CRD of both proteins have been so well worked out that from a protein database one can actually provide the entire structure (that is the neck and the CRD) and it looks absolutely nothing like the typical tulip. See a couple tulips below.  They are just not representative of actual molecules. 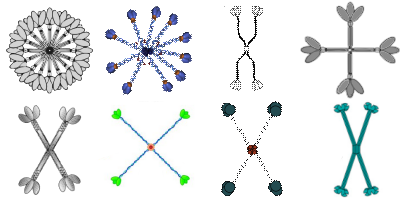