There is quite a bit of variation in the heights of the LUT peaks plotted in SP-D dodecamers (same is true visually with other oligomers, but i have not measured them yet). In the summary sheet I created with 80+ images of SP-D visualized by AFM in publications just by Arroyo et al, it seems pretty clear that not all the molecules in all the trimers are glycosylated.

It is easy to see some distinct brightness on either side of the Ntermini junction by eye, after processing, and easily seen on LUT plots (in fact to miss it is not really possible), but it is not consistent enough in height but is consistent enough in place) to allow some speculation that each of the trimers might have a different amounts of glycosylation.

This is also apparent in the single image from these manuscripts that shows a de-glycosylated dodecamer and there is inconsistent “brightness” in those first peaks on either side of the Ntermini peak.

Below is the same multi-image paste up or layout with about as many dodecamers (there is one pentadecamer and one nonamer excluded from the calculation) as i could easily dissect from the figures. Each has my quick assessment of brightness (peak height) at the site that they call the glycosylation site.  If there was no peak, then 0, if there was an “iffy peak”, then 0.5  if clearly all four trimers in a dodecamer had a bright peak, that was a 4.

Mean 2.6 arms glycosylated,  median 2 peaks, mode 2 peaks n=83.  I have not yet found a specific statement that says one or two molecules in a trimer can be glycosylated, or even just one.  Larger image is two or three posts back. 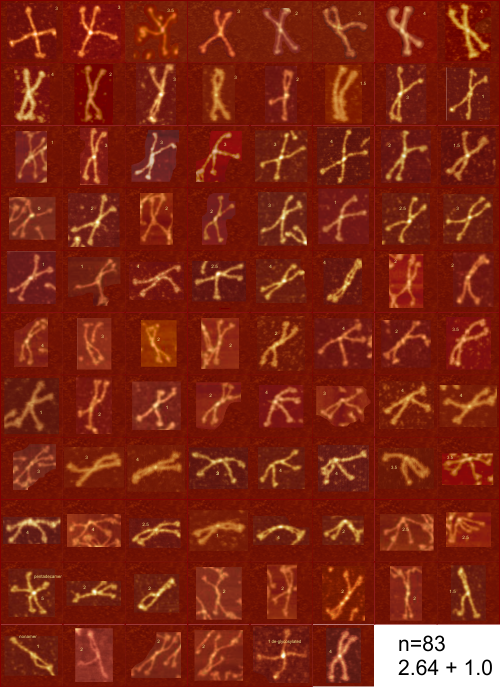