Adjusting arms of SP-D dodecamer to find LUT peaks — not a new thought but one that could help determine how often there are 3 vs 4 peaks between the N termini peak and the LUT peaks for the CRD.  This image is from a publication by Hartshorn et al, and there was a composite image that had about 15 dodecamers of SP-D that I am measuring for:

1 hexamer length, 2) number of peaks, 3) level of glycosylation (subjective measure of potentially 12 sites in a dodecamer), 4) comparing brightness of the alleged glycosylation peak in each of the four trimers 5) using all the SP-D AFM and TEM images I can find to get a general size (i think it is very close to 131nm (and this value is hundreds of measures, and includes errors by individuals that made the images, mainly in bar markers, or missing bar markers, and by errors in how i remeasured those markers and in the inherent errors in tracing with a segmented line the distance in ImageJ etc). Image on the top, unprocessed and a screen print from a maximally enlarged image (enlarged to the identical degree, accompanying bar marker). No anti alias on save, therefore it is pixelated. 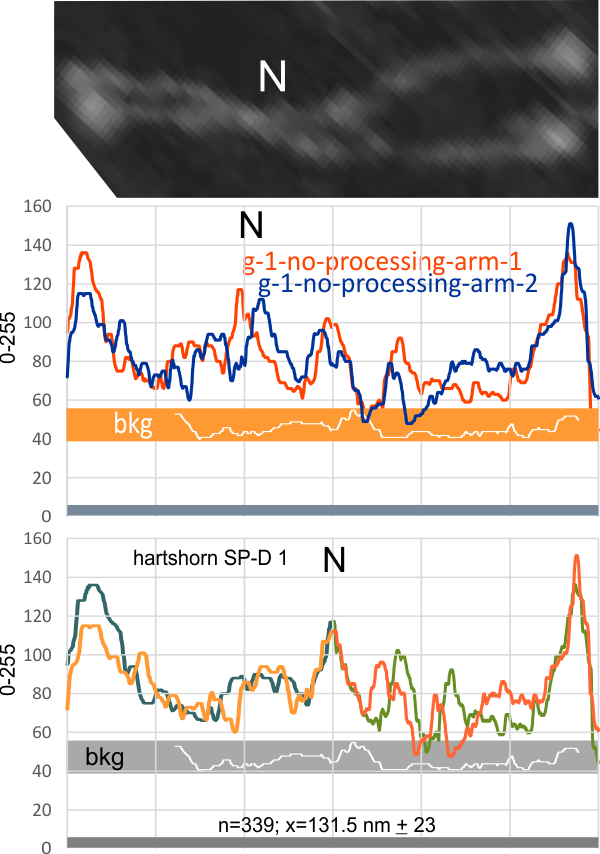 Middle plot is a trace of both hexamers, no adjustments, just the same size graph superimposed, along with a tracing of the background noise (orange bar).

Bottom plot is adjusted by using the N termini peak in both tracings and placing that in the “center” of the plot. This compensates for some of the stretching that has occurred on the right hand side of the dodecamer during processing.  It does center better the peaks along the collagen like domain, and includes a better positioning of the alleged glycosylation peaks. This particular dodecamer was very off center but after controlling for that distortion, shows similarity to other dodecamers.  Count by eye and count of the peaks found in the plots along each hexamer  were 10 (by eye), and 16 (red plot on middle graph) and 10 (by eye) and 19 (blue plot line on middle graph).  Clearly the eye accommodates some of the pixelation while the plot does not.

My hope is that all the plots of all the dodecamers from all the publications that show images will be used at some point by someone who knows signal processing will determine with accuracy how many peaks really do exist and their relative heights.