So the process of identifying which filters work well for image processing of AFM and TEMs (shadowed and negative stained) of molecules, it became diverted briefly into an effort to understand the algorithms of signal processing.  (the diversion was short live

d, as I will never devote the time to understand them, and am not sure that an in-depth knowledge of them is required for those of us who just want to maximize the basic data that is inherent in our micrographs) I am interested in those filters that present in an unbiased and honest and searchable way (and just for fun, the image above).

The previous post (using an RGB control image to watch the erosion and dilation and alterations in pixels) examined some filters in a simplistic way. This spawned an even more interesting idea which was to use an actual “arm” (trimer) of an actual SP-D molecule as a model.  The choice of this arm is definitely biased, as it is what I have come to think is the mostly likely configuration of the SP-D trimer in terms of LUT plots.  SO while the bias in creating the initial vector illustration is mine, it is based on hundreds and hundreds of LUT plots from images processed in dozens of filters and effects in  more than 10 different image processing programs.  So it is “educated” bias.   The “raster” fill for this vector image (which is created with identical trimers — mirrored and rotated) is an actual AFM image of an SP-D trimer.  That “fake” or “control” SP-D model is below. 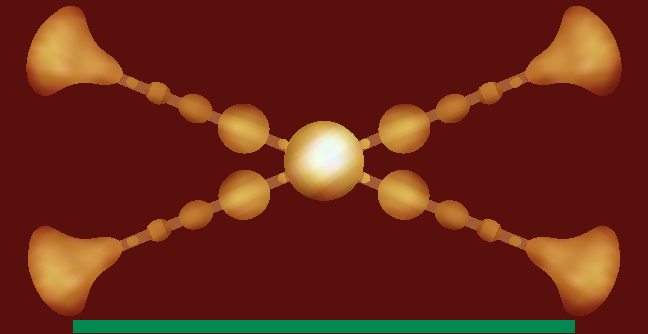 The N termini junction is central, beside it are four small peaks (which I am predicting) next is the alleged N-glycosylation peak (4 of them) one per trimer (about which I have not been able to find an answer as to whether this is an all (all three molecules) or none event, or 1+ 2+ or 3+ event, thus producing N glycosylation peaks of various sizes).  Lateral to that are the three predicted peaks cascading in size and width along the greater length of the collagen like domain.  Finally,  the neck (sometimes present as a slope, or small peak, leading to the CRD which definitely can be seen to have “areas of brightness and looks actually lumpy, just like the molecular models would predict”, and can be seen in the raster fill of this vector image.  Round and bell shapes are based on my observations. 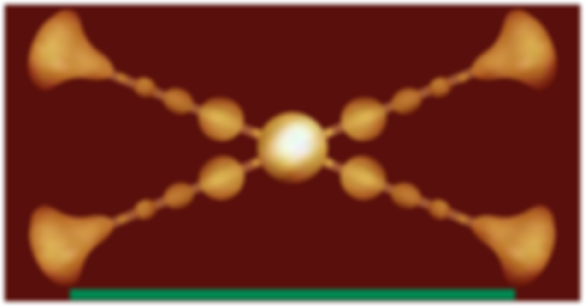 And just for fun