Most conservative estimate for number of brightness (LUT) peaks along an arm of a dodecamer of SP-D is shown in this plot, with color coding from CRD (orange) inward to the Ntermini junction (peach). The recognized peak (glycosylation site(s) are light green. Other peaks are not generally know but consistently divide out into height and width (nm) as shown here, cascading downward in height but varying in width from center (N) to CRD). In most plots the CRD are composed of two, even more, peaks as the CRD fall into irregular places during processing. In this plot however, they show up as one. My impression gained by using less “blur” and more edge detection is that the consistent number of peaks is more like 15, with tiny peaks beside the Nterm central peak. This will, I hope, show up in analysis of all the different processing filters, and with more than a single molecule, as shown here (this is SP-D dodecamer 41 aka 45 (named by me, from publication of Arroyo et al), seen many times before on this blog).

Each peak width and height has been measured, hopefully a summary of all different image and signal processing will confirm this pattern.

My hope is also that somehthing specific about the degree of glycosylation (light green peaks) can be determined, as seen here with different peak heights for that area. It is also clear that the peak area that has been shown to be glycosylated is rarely a single rounded peak, but more often multiple peaks within a general peak. This is vaguely demonstrated on the light green peak shown on the right hand side of the plot. Differences in the length of each trimer of this hexamer are most likely due to how the molecule was spread during preparation. This can be partly overcome by adjusting the trimer plots to the same widths. 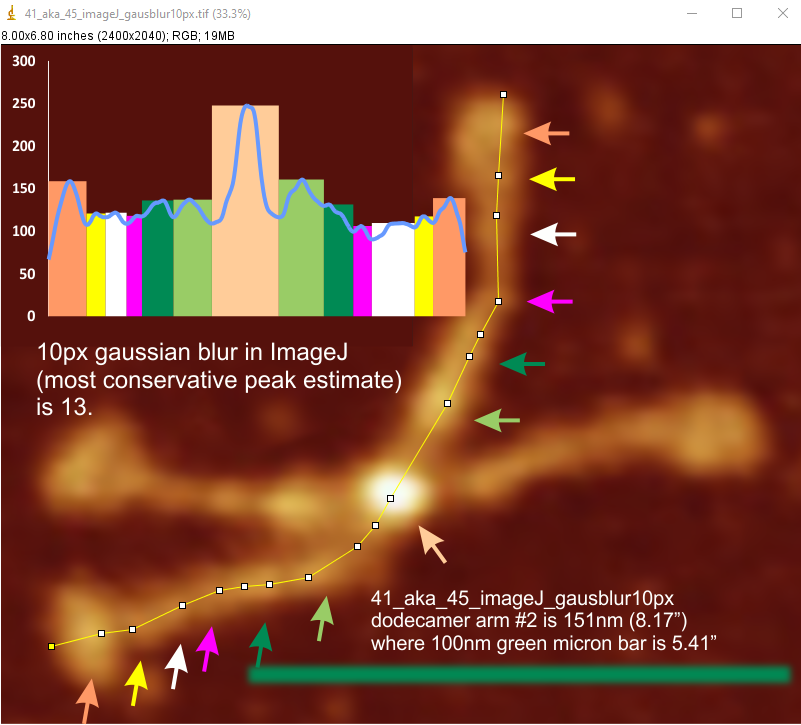