Apologetics: I am tired of trying to find a way to calculate peaks and valleys of this protein in a way that might be considered “biasless”.  Great quote I confiscated from a valuable signal processing website gave me inspiration to make a re-do of it.

“image and signal processing do not substitute for judgment, any more than a pencil substitutes for literacy” modified from Robert McNamara.

That said, I have made (with image processing in gwyddion and photoshop) a really nice image of an SP-D dodecamer and so clearly there are about 5 bumps in each of the CRD domains, a funnel shaped bright spot in the neck domains, smaller (and also thinner) peaks along the adjacent collagen like domain, and variable lumps and sizes for the area of the collagen like domain which is believed to be glycosylated.  THe lumps and bumps in this peak area appear to me to be due to the possible partial glycosylation (one, two or three) of each of the trimers.  Then there is the tiny peak which very often shows up right in the valley between the site of glycosylation and the typically very tall N terminal junctions of the four trimers. The latter (shown in this image) has a little depression which is commonly seen in the N peaks dividing that central area into two separate peaks, and even in some cases with a smaller elevation between the two.  All in all, I didn’t need signal processing of the peak plots to see this, and only used the basic filter functions in CorelDRAW and Photoshop to make them stand out.  Lots of effort went into the “image and signal processing” which has taken about two years, and was really not that informative to ME, but was just required to satisfy the predicted onslaught of “bias” comments. 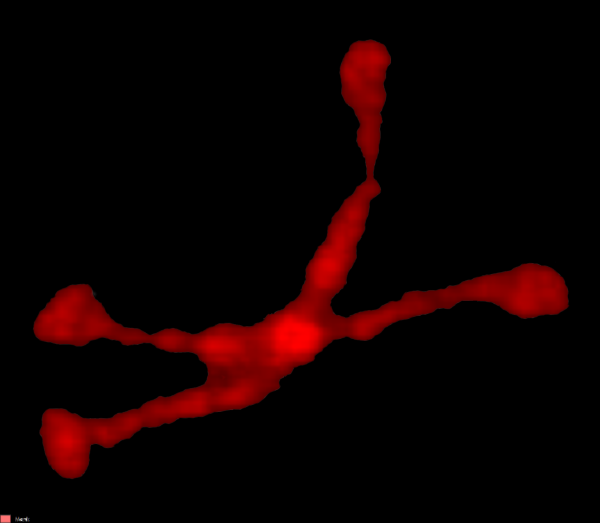 Here is the image described above (41_aka_45, mentioned and shown many times in previous posts on this blog). White arrows and circles point to details mentioned above in obvious places, but all can be found in countless other images of the trimers. 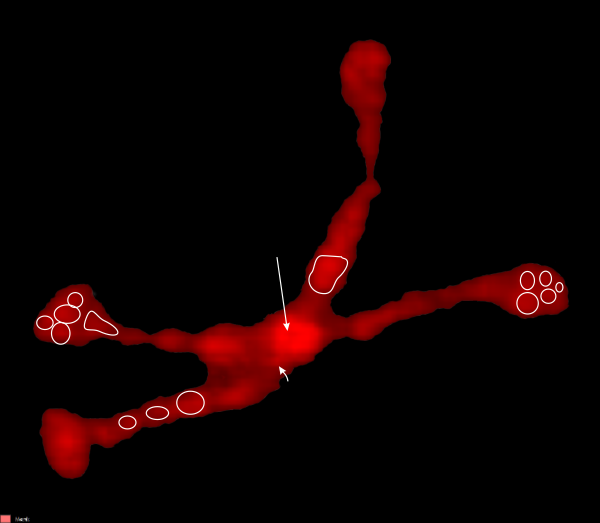