Here is a peak series that I think occurrs with a frequency that legitimizes it as being thought of as a distinct entity.  The peak number in grayscale plots for SP-D hexamers has been calculated by numerous signal and image programs but the pattern itself is the result of observing countless images and the patterns within each hexamer mirrored as two trimers.  (N being central (peak 1), tiny peak lateral to N (peak 2), glycosylation peak being (3), and this peak (4) with unknown function or quality is consistently as wide, with a lower peak height than the glycosylation peak.  The divisions are mine.  It appears (looking at four dodecamers of SP-D (as individual trimers) to be about 11 nm in width.  It does show subpeaks just like the N and the glycosylation peak.  It would be amazing if the subpeaks were indicators of the “twisting” together at a subtle distance the three individual SP-D molecules.  Thats not too far fetched.  This conjecture might hold up until the CRD are reached which becomes rather random positioning of the globular part of the protein.

It helps to visualize this peak (deep green in the ridge plots link to one here). The “tiny peak” (purple) can be viewer towards the top of this ridge plot, but not at the base of the plot. 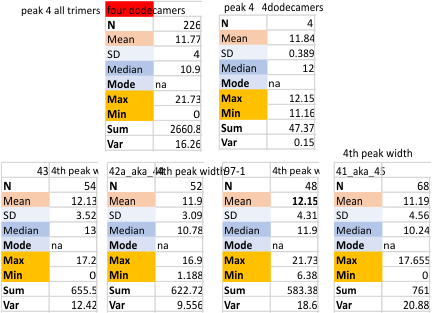 The number of sub-peaks (tabulated without bias within the five signal processing peak finding algorithms, and the hand counts are consistent with this peak being one for sure but maybe with a smaller element or subpeak. I am defining sub-peaks as smaller peaks which visually appear to be part of a single wider taller peak. 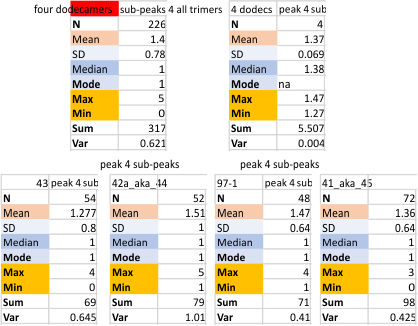