The first rhythm and order I think i found as a graduate student in anatomy (light microscopy of cartilege) was the order of the beginning of long bone development in mice.  Back then, (as in 50 years ago) many journals didn’t have cover images. At this time, dissolving all my records, publications, micrographs from the finite universe, I made this cover for one very lovely design in nature. I attach a very bad phone phot of the publication (not even I, its author, was willing to spend the highway robbery that some journal websites ask for an almost equally fuzzy scanned image of the original).

Here is my suggested cover, half century down the pike, and a free link to a terrible scanned pdf of the paper. 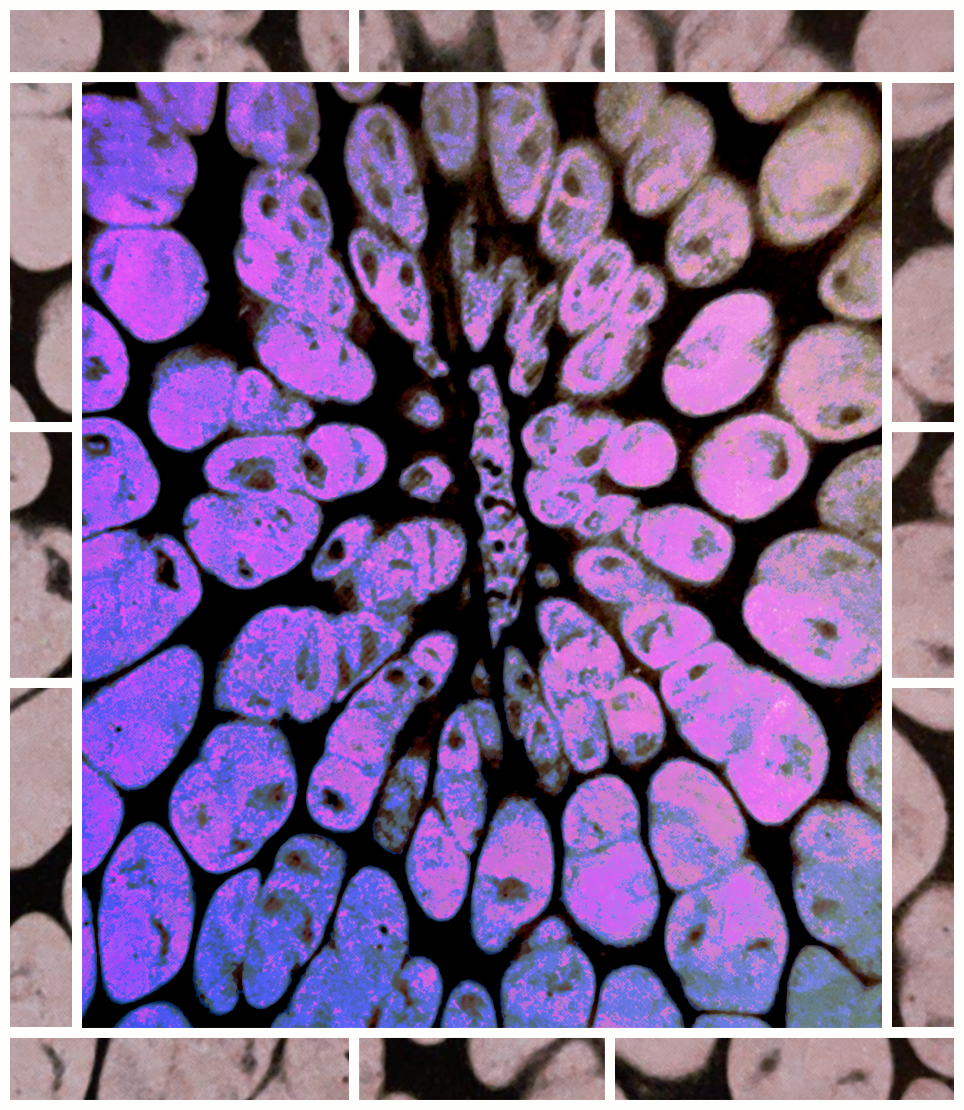 This is an often hidden portion of the SP-D trimer, as it can be hidden under the CRD domain which can flop around and lie in different positions during processing.  It seems that this peak will be something around 5 nm (top figure) depending upon how the CRD domains have obscured it.  It might not have any subpeaks (the mode for this peak is 1 and it seems reasonable for this relatively tightly wound helical neck portion of the trimers (bottom figure). 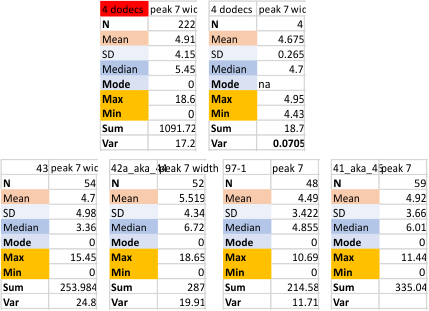 It will be interesting what adding four more measurements to this dataset will confirm or refute. It is nice that the small N of four (composed of 50 to 100 separate grayscale plots of trimers (from a tracing of the hexamer) after image and signal processing, show some consensus. 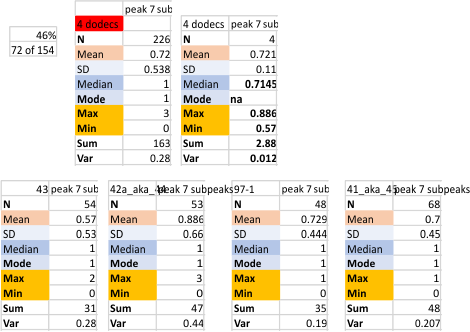 Only 18,  times out of 636 plots of surfactant protein D trimers was there something that could be identified as a peak at the top center (or close to center) of the N termini junction peak (light green in the two top plots below).  This was found in 3 ipeak.m signal processing settings, and one Lag-Threshold-Influence algorithms used in a batchprocess (also signal processing), and the rest of the time with counts of plots that had been image processed.  One of the more prominent displays of that peak came from Gwyddion, gaussian blur and limitrange 100-255 filtering.

The bottom plot below (Gwyddion, gaussian blur and limitrange filters) was one of the two plots given to the citizen scientists from which to count peaks.  None of those individuals chose to identify this thin N termini blip as an actuall PEAK.  It clearly exists sometimes, but its relevance is not known.

The division of the N termini peak into TWO clearly identified peaks (rather than three which would include the central “green” peak below) was more common. 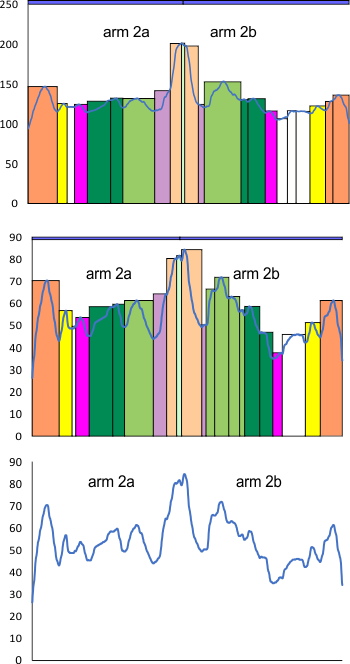 This program was organized by Aaron Miller from online references to using Lag Threshold and Influence to detect peaks in signals.  The signal here is the excel output from a plot of a surfactant protein D dodecamer (plot of a single hexamer, CRD to CRD shown here) which was subjected to L-5, T-1, I-0.01. The peaks are identified (black line series) while the actual plot is shown as the blue line. Using this csv export I added the peak widths and heights using CorelDRAW. I will convert height into grayscale, and width into nm.  Itdid take several minutes to create the bar graph which has been colored in accordance with known, as well as yet unidentified peaks which I have consistently observed over many plots of nearly a hundred dodecamers of surfactant protein D.

1) pie in the sky purpose = adding this peak finding option to ImageJ (which someone else will have to do (LOL)).

CRD=carbohydrate recognition domain (orange); Neck domain (yellow); unknown, wide peak (white); unknown low and narrow peak (pink); unknown large relatively tall peak adjacent to the glycosylation peak(s) (dark green); glycosylation peak(s) (light green); unknown tiny peak between N termini peak and glycosylation peaks (purple); N termini peak(s) (peach). Actually the halves of the hexamers should be identical however, the artifacts that arise from processing (true of all microscopy) show that not all elements are present in all tracings.  Eg, the neck domain is sometimes covered up by the CRD domain as the former is largely nested under each of the three globby CRD in each trimer. How I trace the segmented, 1px line over the image is hugely important, and aim for the brightest places along the length of the hexamer. (Image used for this plot has been shown on this site so many times that posting it again just wastes space (LOL)). 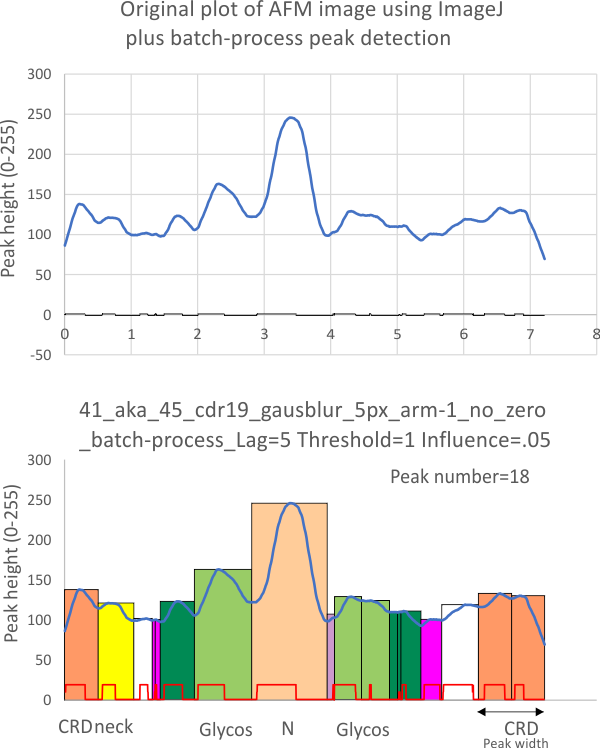 COMMING SOON: Are there instances where people can more accurately identify peaks than image and signal processing algorithms? 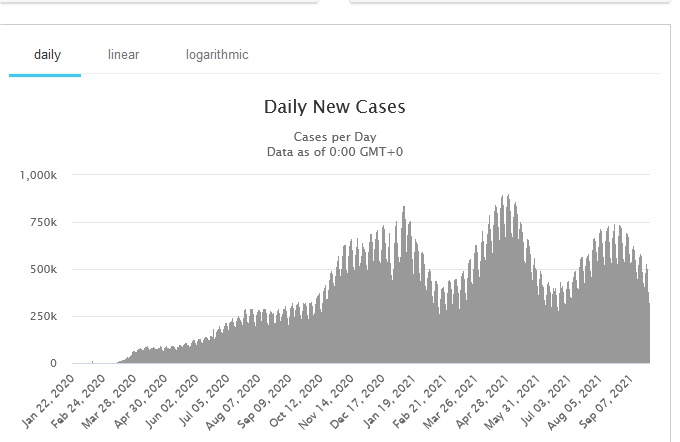 I think this image shows pretty nicely how little, except for cosmetics, the image processing of a cropped portion of a multimer involved in immune defense and differentiation in epithelia shows here affects the raw data (LUT grayscale plots).  There are small variations in the length of the “arm” which are more likely due to that actual tracing in ImageJ than any difference due to processing. That said, gaussian blur tends to increase the dimensions slightly, highpass filtering increases the grayscale, and unsharp mask creates greater peak heights.  So the peak number and the smoothness of the plot can be improved with processing, and the peak height, but no real gain in information is obtained.

The greater task is to look carefully at the molecule, deciding whether tracings of the beginning and ending of close, twisted and overlapping arms (as plotted) (made by hand) make sense.

Images below show plots (color coded as to image processing filters used) and the actual images and trace-lines (screen print from ImageJ tracing). In this case: filters, each named,  were performed in photoshop; plots were made in excel as traced in ImageJ; calculator.net was used for determining means and SD of arm length and peak number;  corelDRAW was used to normalize the x axis (y axis remained unchanged from original plots) and to color code the plot lines. 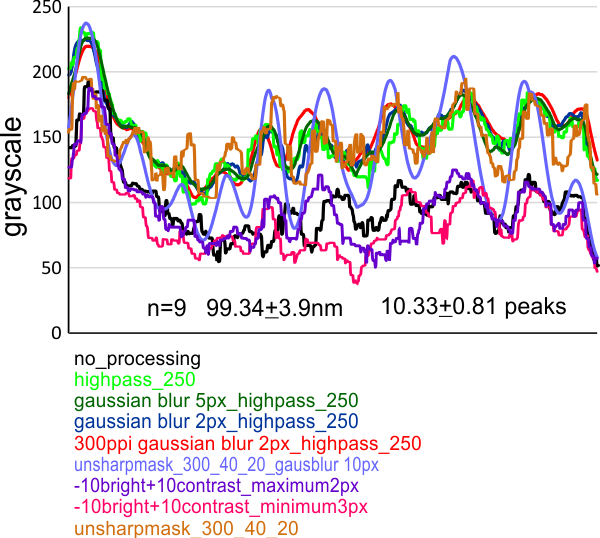 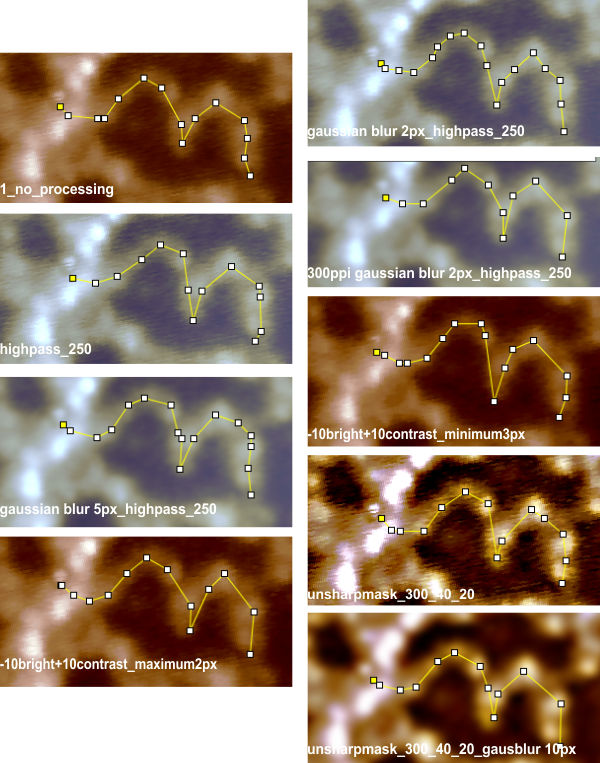 Next task is to measure peak widths and heights. Unsharp mask (amount 300, 40px radius, 20 threshold) followed by a 10px gaussian blur provided the smoothest plot.  The High peak (left) and low peak height for the next three peaks, and a subsequent high peak seems to be a pretty prevalent pattern for arms in this molecule.

This is the plot for unsharp mask and gaussian blur. It is so remarkably like the very first plots I made on this protein.  Since 99.34 nm was close to 100 i used a 100 set of 1 nm dividers to mark out the valleys of these peaks.  Interesting features are the absolute regularity of the first five peaks, not in height, but in width, and the first and 4th peaks being higher, and the series of similar size peaks in the middle of the plot. 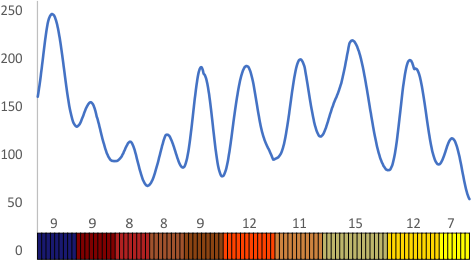 High pass filtering can help sort out background from data, especially microscopic data. Here is a summary about the high pass filter when used alone, and with gaussian blur. The subject matter is a segment of a multimer (either round or linear) and the brightest peak is where the tracing for gray scale LUT tables begins.  Each trace is shown, and along with that a plot of the peak height (and soon to be measured peak width (at mid height and at the base).   The plots of the arms shown at the bottom of the figure are color coded with the plots shown in the graph (graph made in image J, highpass filter and gaussian blur made with photoshop 6. Figure assembeled in CorelDRAW x5. THis is NOT surfactant protein A or D, but another multimer involved in innate immunity. 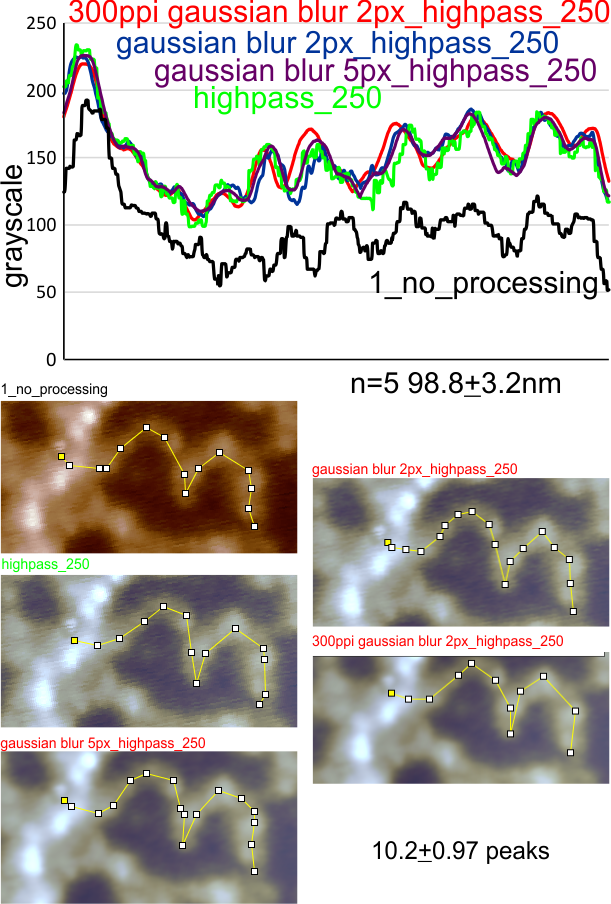 Has anyone else noticed a speech pattern from the previous president.  It is like a set of words become a mantra, perhaps a meditative experience, or a soothing mantra, maybe even a prayer list, a mandala, a rosary or prayer beads. The following quote made me think of this. 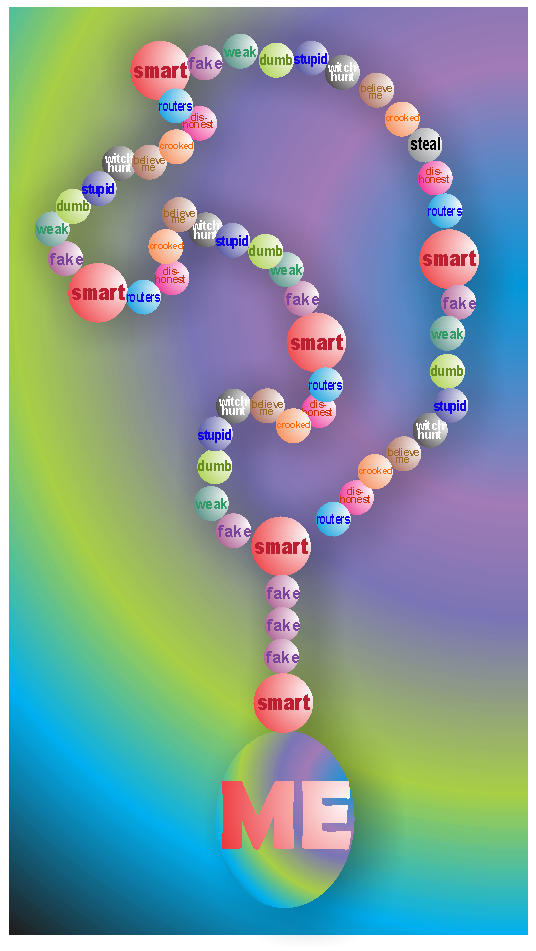 I think all will
again be well when
the garden begun
before unforcasted
change have you
Back again to then
connect
The dreams of your
Father and talents
of the family.
I think that the
direction can be changed
releasing in
centrifugal loss
that not needed,
to become more
like Saturn, in
a ring about the planet.
I think you will,
once the swirling air
settles, know
why you were called
then, for no more
than one clear minute.
And that moment
Is maybe more but
no less than
nights, than mornings
and in between,
spent in the
eye of the hurricane,
grasping for an
answer to
hold on to.