There are variations on the grayscale peak within this molecule, which has not yet been described. I have found three variations.
1) simple smooth peak
2) two peaks
3) three peaks (this is infrequent enough to be ignored, perhaps, but I am giving you relative incidence, peak width and height anyway.
The values below are for all peaks counted in three datasets: image processing, signal processing, and citizen scientist counts.
The dataset has plots from one image removed (Inkscape, roughen inside – which produce peak numbers for the entire dodecamer which were well over two standard deviations from the other processing programs). The other change is the switching two sets of data back to normal, from the order they were traced – which was in reverse direction, meaning that the what turns out to be a significant difference in arms length overall, these trimers now the correct order.
Only 13 of the 634 (recall that four traces were removed (Inkscape, roughen inside) total plots of trimers showed a tiny peak within the N termini peak.

peak width is based on the mean nm length of a hexamer from molecule 41_aka_45. That mean, SD, median mode etc, is below (142.87 nm from CRD to CRD) as distance recorded from the plot through the center of the hexamer using ImageJ, and calculated back to the bar maker that accompanies the micrograph.  Each plot varies slightly, and the nm was recorded for each image processing filter and mask.  No hexamer length was recorded for signal processing plots, as these values are all based on the existing image data. and would constitute a repetition. 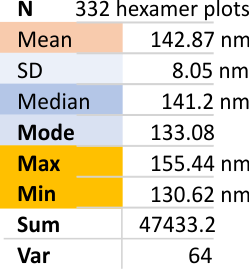 All the incidences of tiny peaks within the N term peak (not to be confused with the tiny peaks on the valleys either side of the N term peak) occurred on the right half of this particular dodecamer, likely because of some incident as the dodecamer was delivered to the mica. Whether this is something to rare has to be determined. Of the 8 occurrences (, 2 were in arm 1 trimer a, 6 were in the plots of arm 2 trimer a (2=arm 1a, 6=arm 2a).  Peak width conting so few is less than 4 nm in width. See chart below.