Using just four SP-D molecules, with arms plotted as hexamers, and recorded as trimers (reversing the mirror symmetry and using the N term value as the whole N term peak width), the glycosylation peak (now called the 3rd set of peak(s) in the trimer) sometimes has a lumpy appearance, and signal processing programs routinely divide that single (sort of) largest of peaks (second to the N term and the CRD peaks) into separate adjacent but clearly contiguous peaks, sometimes as many as 6.  When i see the brightness areas i dont often agree on what the signal processing programs call “separate” peaks as they really come together in one single significant elevation, clumped as separate but connected peaks.  The number of separate peaks within what is typically pointed out as the glycosylation peak in AFM micrographs actually has more than one peak… these data sort out using 4 dodecamers (16 trimer plots – assessed by 5 signal processing programs, several imaging processing filters, and one unprocessed image collectively) that about 2 peaks show up in the glycosylation “bright” spot.   1.92+0.204.  This will likely change with the addition of more molecules added to the set. 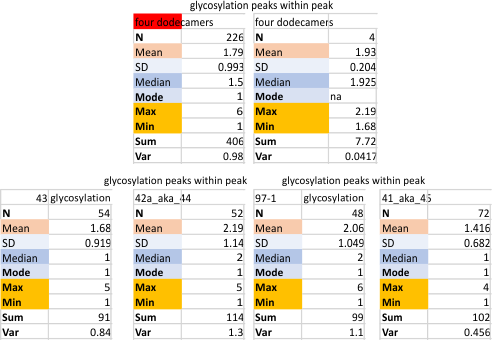