Small peaks in the grayscale plots of SP-D dodecamers include some that occur between the N term juncture and the glycosylation site.  They happen with regularity. I have not counted the number of times they show up the grayscale plots, but this dodecamer has three, and they are prominent, easily seen after image processing.  See arrows pointing to three small peaks. (likely a fourth exists, but did not show up here as a random artifact).  This dodecamer has been image processed (but not signal processed) and the molecule number is in the left corner of the top image, i.e. 99a.  The tiny peak shows up three times out of four, but is missing from the other hexamer where there is only one peak.  Just as an aside, the CRD (carbohydrate recognition domains) are nicely shown with this image processing protocol, sometimes all three CRD can be seen.  Also of note, the N terminus does not look like it has any valleys in the center. 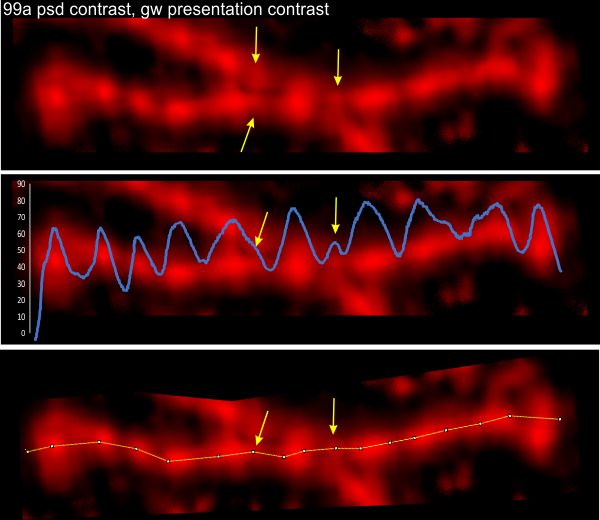 I continue to thank Arroyo et al for the AFM images which I have processed the …. out of.