The choice of what algorithms to choose for analyzing 100+ surfactant protein D images (AFM) will amount to selected image and signal processing functions. 6 – 10 plots will be made for each hexamer of a single dodecamer.  The concensus plot to which to compare all these plots will come from a concensus of peak number, and peak widths and peak heights from these data.  A composite ridge plot created from a single molecule (41_aka_45) (below) indicates that very predictable patterns of peaks and valleys do occur.  That said, it is pretty certain that there in an ideal tracing of a trimer there are 7 peaks, and something around 15 in a hexamer (which depends upon whether there are portions of two CRD in the tracing and two peaks found in N (which does happen).

1. maybe two peaks at N
2. two tiny peaks on either side of N
3. The glycosylation peak man NOT be just one peak but a set of rolling peaks – as the number of carbohydrates goes from 1, 2, to 3.
4. a consistently appearing peak peak similar in size to the glycosylation peak located on the lateral sides of the glycosylation peaks, and
two additional,smaller, as yet unnamed peaks, lateral to that peak and before the neck domain.
5. Occasional appearance of a peak related to the neck domain, dependent upon which direction the globular carbohydrate recoginition domains lie during processing.
6. One or two large peaks of similar width and height occur on either end of the hexamer (depending upon the positions the carbohydrate recognition domains fall into as they settle during processing. 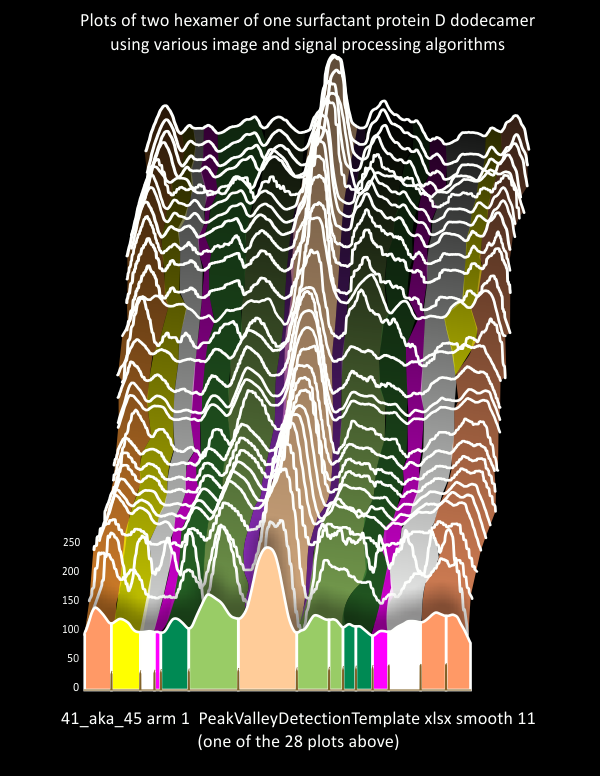 Peaks will be traced as hexamers using a 1 px segmented line, always left to right, and always with an ID of which arm ( hexamers (arm 1 and arm 2), and trimers (arm 1a (always left, and 1b always right, etc). No rotation of the original image will be made (to randomize the traces in terms of possible warping in depending upon the direction of the line as it follows the molecule (this was a serious issue in Gwyddion – but i have not detected it so far in ImageJ), plots exported from ImageJ will be saved, plotted in excel. Screenprints of the molecule, tracing, and plot will be saved as “white paper”.

This is really a visual document of what I have found with a single surfactant protein D molecule (image of Arroyo et al, plots made in ImageJ, some programs for image processing include the industry standards (corelDRAW, PhotoPaint, Photoshop and others) and industry standards for signal processing (Scipy, Octave, and excel Templates (Thomas O’Haver, and others).  It demonstrates to me that the known peaks in SP-D are not the only peaks that will influence a model of the structure of that “trimer” “hexamer” “dodecamer” or other “multimer”. Each trimer shows what I believe to be at least 6 peaks on either side of the N termini junction peak (the tallest peak in the center of each of the diagrams below). The plots here are of hexamers – that is, two trimers with C term on either end of the plot (ie mirrored) , and the N termini junction in the center of two trimers.

The set of plots in the ridge plot (plots stacked and staggered, background black) are those obtained from various image and signal processing plots.  Sample plots (from one of the two hexamers of this particular protein (which i call 41-aka-45), are of arm 2). I have colored the peaks that are known  (light orange in center=N term juncture; darker orange on either ends=carbohydrate recognition domains; lighter green=glycosylation peaks; Purple peak=unknown tiny peak in the valley of N term juncture; darker green=unknown peak beaide the glycosylation peak; pink peak=consistent narrow and not tall peak; yellow=neck region, often seen peak that corresponds with the differences in obscurance by the CRD peaks as they may or may not lie over the alpha coiled neck domain. 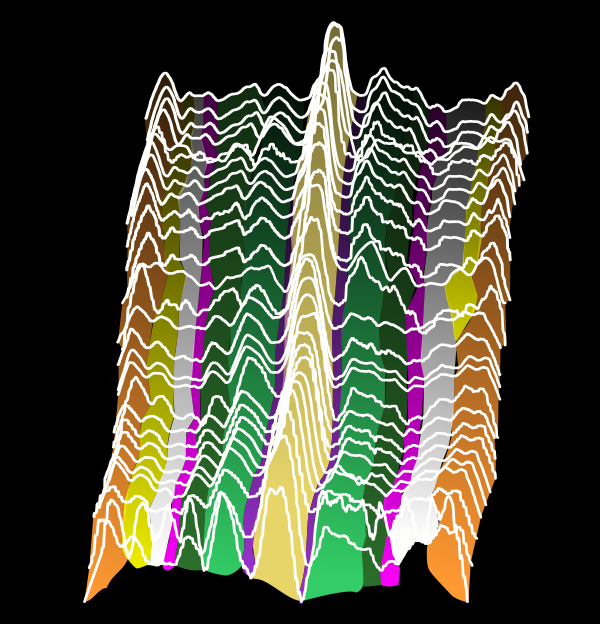 Lower image=actual plots (some from each arm of the hexamer) to demonstrate how the different colors in the ridge plot have been determined.