Peak counts in the span of both hexamers of a dodecamer comes out to be something between an even and an odd number. This is not really interesting except that it might relate to the issue of whether the N termini (junction of four trimer N termini) that is the center and highest peak found with AFM of surfactant protein d dodecamers….  there is good visual data that says sometimes the N termini are joined in ways other than overlapping (overlapping is the wrong word, more like juxtaposed).  The later, in AFM can be side by side, or end to end. No consensus has been found in the literature so far by me, by me anyway.  I subscribe to the idea that more configurational variations  happen that is usually realized.

Just  over 350 measurements of brightness”peaks” for ONE molecule of SP-D (a dodecamer AFM image from arroyo et al (which i have named 41 aka 45) the data for peaks along the arms is:  (keep in mind that the center peak is likely not mirrored in a consistent way, thus the number of paired peaks on right and left arms of both hexamers will tend to be an odd number)  in that sense, the peaks from looking quickly at each image, and then using ImageJ to plot the peaks of brightness, and adding those, the number of peaks in each hexamer is as follows.  This particular molecule has arms of different lengths with what I have called “arm 2” being longer than arm 1.  The right portion of the dodecamer looking like it was been stretched during preparation. It is still useful to see whether the physical elongation of an SP-D arm allows for greater, or lesser definition of the peaks which occur in the area between the N termini and respective CRD domains.

Below, the image, the summary statistics.  These are all measures on the same image, processed in a dozen different image processing programs.  The image below is a sample, bar marker is green, and 100nm. Image stated above is from arroyo et al. 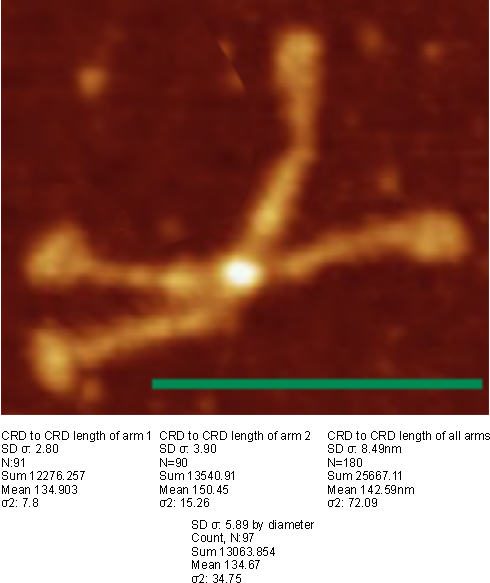