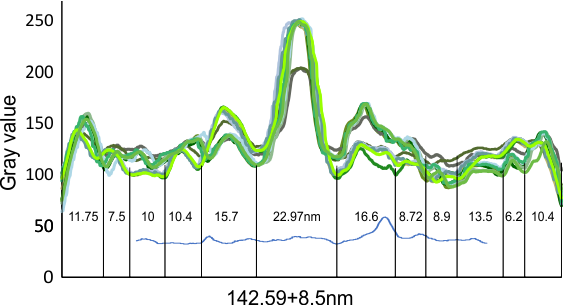 Using CorelDRAW19 various processing algorithms have been applied to one AFM image of surfactant protein D. This image was derived from Arroyo et al, and is among dozens of images from various authors that I am using to test the validity and efficacy of such image processing. The list of programs used for this particular image (then vary from processing programs, e.g. photoshop, gimp, gwiddion, imageJ etc. because of the menu options in each program) and from free and proprietary image processing libraries that may or not be available to software developers. While it has taken months, the comparison is something that I needed to do since I have both old and new versions of the industry standards (CorelPhotoPaint, and Draw, and Photoshop) and it was important to see whether there were changes in image processing algorithms that caused significant differences in gray scale (y axis) for surfactant protein D images.

Each plot is a different color and each arm (meaning CRD to CRD in a hexamer) were plotted separately and are shown separately  thus, 16 individual plots and 16 colors. Approximate width at the valley of the plots is given in nm.