These data are all performed on mice (KOs and treated) from the laboratory that was run by Dr. Gary Shull and his students and postdocs. I saved these plots (which were intended to be submitted as a manuscript back in 2007, when I retired) and am just now sorting through the data from those years in microscopy.  I did morphometric measurements on many of the mice (listed below) which were published, but gathered together those into a composit kind of analysis — not a publication, just a view into what could have been published had time permitted. I dont think at this point anyone will try to rebuild this, but the information as a “glimpse” into changes in the basolateral (i dont like that term, it is clearly a lumping together of two very distinct membrane domains, nevertheless it is in common usage), apical membranes, tubulovesicular, and other structures into a quantitative assessment over many different genetically modified, or treated mouse parietal cell datasets.

The graphs in the pdf represent hundreds and hundreds of hours just for the morphonetry, let alone the animal experiments, the creation of the animals.

The plots in this pdf (some shown below just so you know what is in the pdf) are low quality prints that I used just for reference. The actual data can be recovered with great effort but if someone wants the numbers, i will try to retrieve the original datasets. A pdf of all the graphs is HERE parietal_cell_morphometry_many_KO-mice1 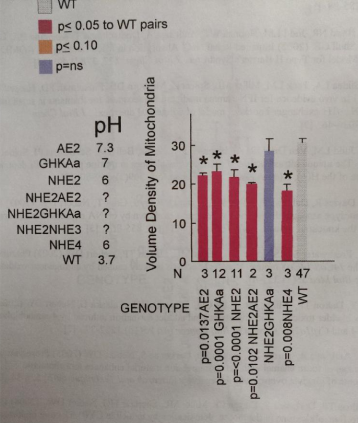 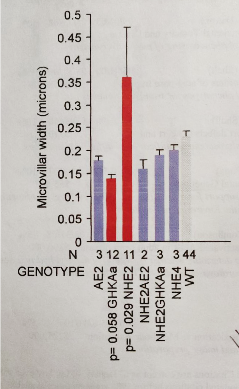 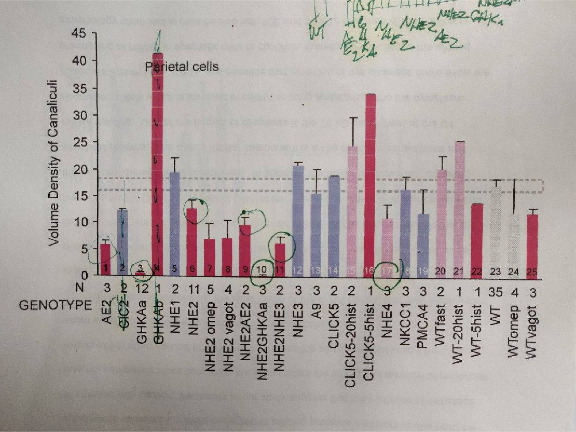 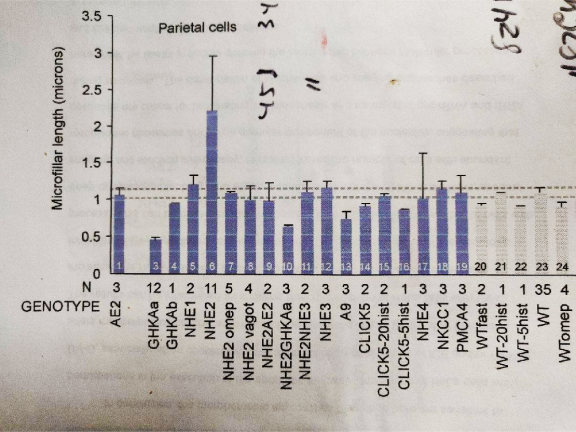 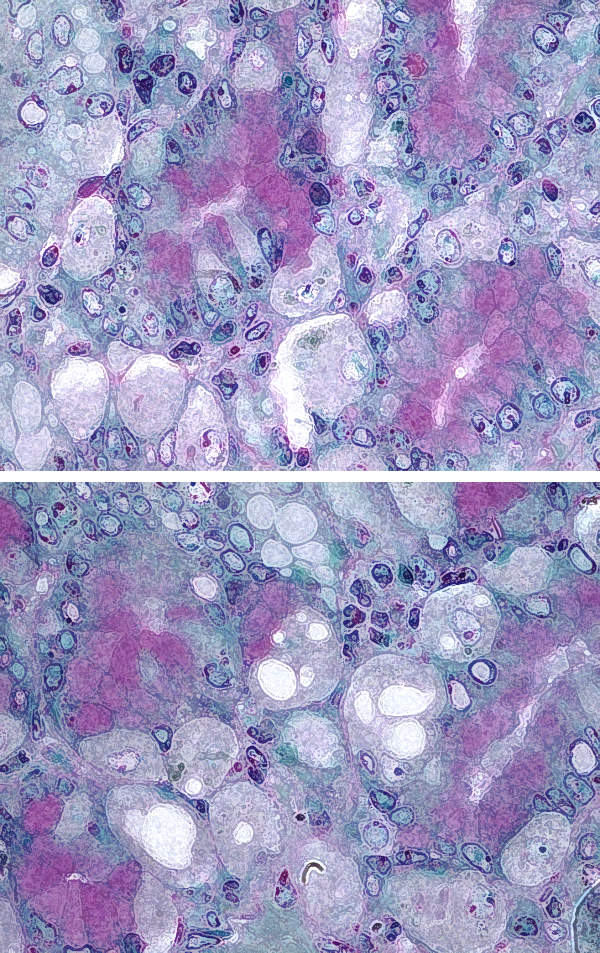 Toluidine blue stained thin plastic sections of parietal cells in the stomach of a mouse (experimental strain). Image processed, probably in photoshop. Would love to have a scarf with this print.

Mitochondria: parietal cells are mitochondria – rich as I see this counting up numbers of these organelles in cells while also tabulating the number of mitochondria which are tethered to desmosomes.  They are large, fat and everywhere, occupying much of the cytoplasm (as opposed to other cells where there are secretory granules or RER and ER machinery. They are quite close to all plasmalemma designations,  e.g. apical, lateral and basal, and even the canalular membranes BUT leaving a consistent small critical space between them.

In this toluidine blue stained plastic 1 micron thick section you can see the darkish greenish dots around the pale looking canaliculi of parietal cells (arrows) nested closely and packed between the membrane structures. 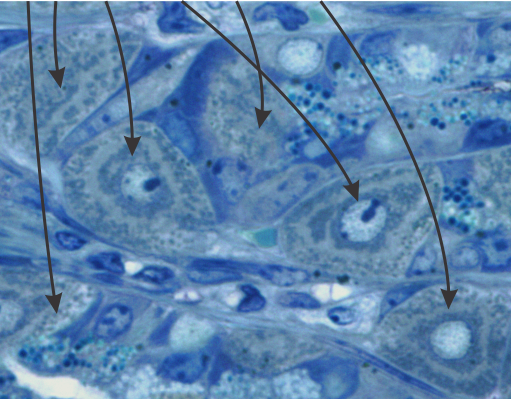 I wish i had taken a higher mag picture of this apoptotic nucleus as well as identified the cell type. I do know it is from animal #500 in a study of aged ghkaα-/- mice, this particular KO was 12 months old. It could be a parietal cell since in other image parietal cells are shown to have a “glassy protein” (stains without much texture and eosinophilic with H&E) (just recollection here). The RER is greatly, ribosomes are very closely packed (indicating the production of large amounts of possibly large protein products. Checking the fairly electron lucent contents of the RER there doesn’t seem to be any obvious oligomerization, polymerization or layering of the contents.  The light areas in the perinuclear space and around is dilated RER. It could also be a zymogen secreting cell. 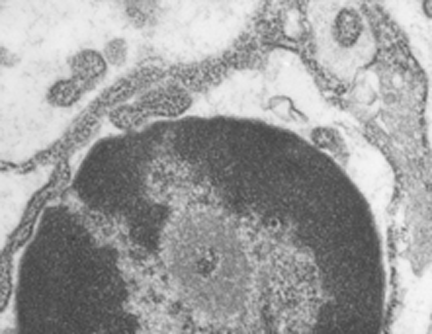 One nuclear pore on the middle left nuclear membrane, and a part of another to the right and above that one. Packed ribosomes are in array on the RER membranes (the black and white cytoplasm pictured around the nucleus),  lots of condensed chromatin (purple) which may be exaggerated by the section being somewhat tangential to the widest diameter of the nucleus, and adjacent euchromatin (gold) which in this case looks pretty dark (not just because i pseudocolored it).  There is a prominent perichromatin granule just to the lower right of center (black) and interchromatin group (sometimes called nuclear speckles which to me makes no sense) is light violet.  Pinkish spot in the interchromatin granule  is probably just euchromatin? 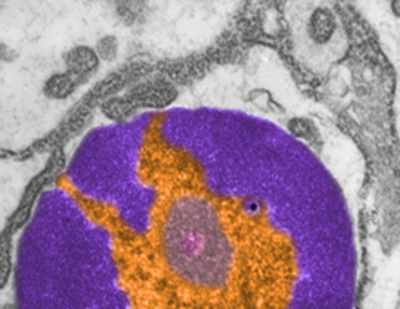 I just found these nice electron micrographs digging through the stack of 20k images and they are of the stomach of a mouse that is null for the gastric HKAtpase alpha. This was part of a study long time ago with many other main authors. The tips here are in the stomach, which was one of those unusual findings, that is, ciliated cells in and among the parietal and zymogen and mucus cells.  Clearly ciliated however.  So the tips of these cilia are really nicely preserved and in focus and it is clear that there is a glycocalyx, not exactly like that of the brush border in the intestine, more like that found in the trachea, typically “normal” ciliated epithelium. So below are TWO images (one inset) tips of 5 cilia which clearly show 6-17 filaments, and my projected total is given as well.  The electron dense  “sphere” or “dome” of attachment subadjacent to the plasmalemma is very obvious. 16447 and 16448 block 65165 gHKAa-/- mouse 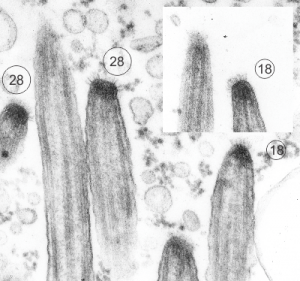 I googled images to see what current research had been done on these fine filaments and the density seen within the tip of the cilia in the first figure below and found a reference back to 1978 (Charles KuhnIII, Wayne Engleman The structure of the tips of mammalian respiratory cilia Cell and Tissue Research January 1978, Volume 186, Issue 3, pp 491–498) which put the estimate of the number of filaments at something around 6 or 7, which makes no sense to me in 3dimensions…. So in the circles I approximated what i think the number of filaments would be. I found a second “antique” paper (only calling them antique because I have papers that old as well which contain details no

t really found about ultrastructure in current literature) and it also thought the number of filaments was in the single digits. This diagram by Spicer (which of course I would redraw with more filaments). It is cute.

Sadly, a more current paper also quotes a low number of filaments… but has an interesting observation about a periodicity, so a quote from them is HERE “The apical structure of human respiratory cilia was studied using thin and thick sectioning techniques. The distal end of the mature cilium is narrowed and presents dense material and a crown-shaped glycocalyx. The crown is composed of three to seven bristles, having a mean length of 31 nm and showing a periodic structure. The capping structure of the apical part of human respiratory cilia is composed of a plate and an electron-dense cap tightly bound to the central and to each of the nine peripheral A microtubules. Lateral spokes link the peripheral microtubules to the internal ciliary plasma membrane and dense filaments radiate from the dense cap to the ciliary crown. These ciliary apical structures may be involved in several functions associated with microtubule assembly as well as ciliary movement and mucociliary transport. Apical structure of human respiratory cilia. Available from: https://www.researchgate.net/publication/19463484_Apical_structure_of_human_respiratory_cilia”