Here is a high contrast approach to image processing an AFM image of surfactant protein D (number 97 in this series). The processing is shown at the top of the image and it entailed altering contrast in both photoshop and gwyddion.  The plot actually is less informative than limiting the range (gwyddion) and applying the gaussian blur filter.  The increased contrast takes the N termini junction off the scale in brighness (255) and reduces the opportunity to compare peaks sizes (particularly with the adjacent glycosylation (alleged) peak which can vary. Comparison with previous posts on this blog shows different image processing, also concurrent signal processing and resulting LUT plots of the same SP-D molecule. 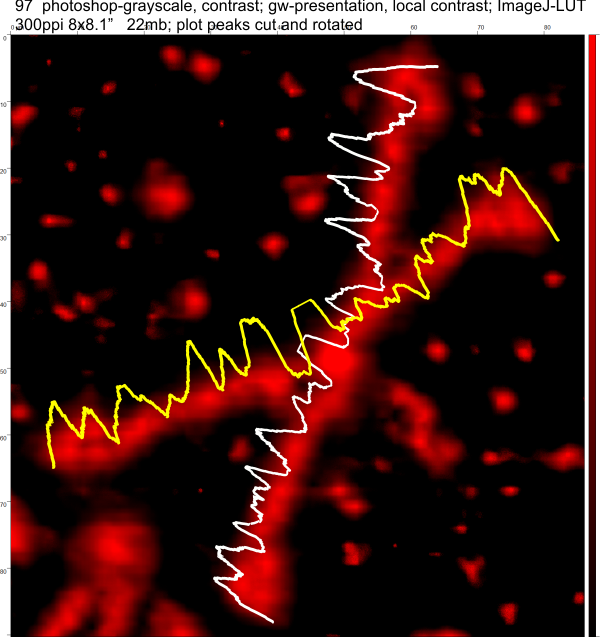 The advantage is however, a great visualization of the number of bright spots alone each of these arms of a dodecamer, clearly suggesting that there are regular structural elements. Per two previous posts… it looks like a hexamer (one line from carbohydrate recognition domain (the ends) to the other has a consistently visible more than 15 peaks.  Typically two peaks in the carbohydrate recognition domains, often two peaks in the glycosylation area (which might represent a level of glycosylation from 1, 2 to 3, one spot for each molecule of the trimer) and the stepwise peaks from the glycosylation site towards the neck region.

I dont really “like” this level of image processing (there has been no signal processing here), but it is informative.  It is easy to see peaks and compare them with underlying bright areas along the arms. Graphic made in CorelDRAW.