My quotes from an email to the PI of this project on 14CoS-/- mice treated with NTBC and withdrawn from NTBC. The electron microscopy on liver’s of these animals was really fascinating. Pan-apoptosis.”

Take a look at the nucleolar structure, the dense body (likely denatured DNA and RNA) right next to remains of the a nucleolus and “notice” the regular pattern of striping (lower image, enlarged from square in right hand image above. Left image, earlier apoptosis with lace looking nucleolus with lots of fibrillar centers, and right, fibrillar center with dense RNA and/or DNA probably laddered. 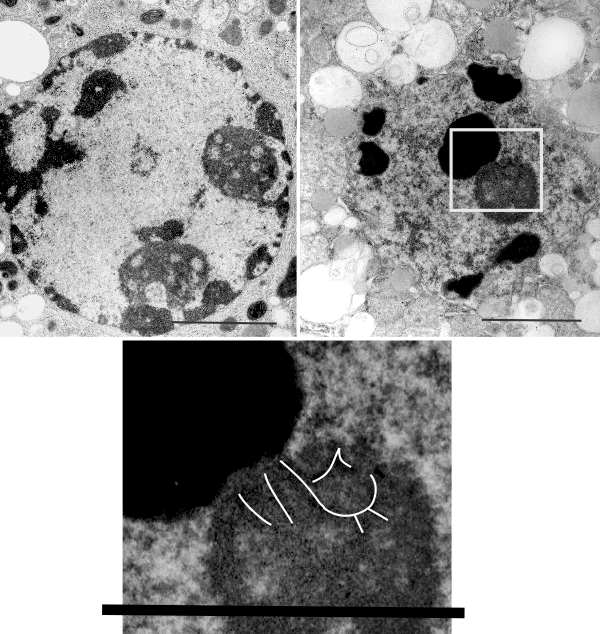 “NTBC withdrawal in 14CoS/14CoS but not in ch/14CoS mice leads rapidly and progressively to apoptotic changes in hepatocyte nuclei. Early apoptotic changes were not associated with inflammation, however after 48 hrs some polymorphonuclear cells were present in the sinusoids. Isolated apoptosis need not induce an inflammatory response, however, when more three quarters of the hepatocytes are in some stage of apoptosis, the absence of inflammation is not a realistic expectation. The endpoint of both apoptosis and necrosis is in fact the same, cell death.” ”

“Mid-apoptosis is defined as hepatocytes where nuclei exhibit considerable peripherally condensed chromatin and unusually large nucleoli with very prominent fibrillar centers. Late-apoptosis is defined as cells where nuclei are pleomorphic in shape, have large clumps of chromatin condensed radially, an intervening nucleoplasm without texture, and show a disruption of nucleolar aarchitecture. Necrosis is defined as a swelling lysis of the entire cell, loss of membrane integrity, with debris everywhere. All histologic assessment was done using a blinded protocol. Percentages were calculated by dividing the number of apoptotic (or necrotic) cells by the total number of hepatocytes counted (>500 hepatocytes per animal), multiplied by 100.”
I am not sure how many or which of the countless images of hepatocyte nuclei ever made it into a manuscript but here is one image below where mitochondria have a very peculiar transformation. 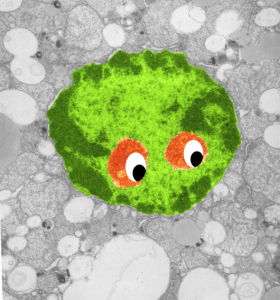 So sorry, ha ha, but when i see this kind of nuclear symmetry (an electron micrograph, with two little presumptive eyeballs staring at me (condensed chromatin), zygomatic arches coming off (as condensed chromatin on the sides of the nucleus), and a hairline part at the center of the frontal bone (condensed chromatin and nuclear pores on the inner nuclear membrane at the top of the nucleus) and a pointy chin, I am compelled to laugh out loud and add this to my collection of TEM-Devils, and sometimes other objects like hearts and ghosts and snowflakes. Anyway, here is a little green cutie, which spawns from a mouse hepatocyte null for 14CoS and not receiving NTBC as a “saving” medicine and prone therefore to undergo massive hepatocytic apoptosis within a day or so of birth, and ultimate demise. This mouse is 24 hours post partum and showing signs of hepatocyte apoptosis, and mitochondrial and ER disarray, neg 16042, block 65718, anm#5, one chatter line removed with photoshop, layers constructed in photoshop, pseudocolor and eyes added in CorelDRAW.  Dont you wish there was a place to publish such stuff…. Maybe i will start my own journal…  help me think of a name.  (LOL)

More nuclear pores, just randomly collected various cell types. The criterion that I used was simply the presence of vertical filaments (either part of the nuclear pore basket on the nuclear side or the filaments in the cytoplasm on that side. These come from lung alveolar type II cells, from hepatocytes, and from CoS14 ko mice, rescued and non-rescued, and probably a couple from Gclc conditional KO mice. These are just to give the limit of what effects random sectioning through a block of tissue can do to a round or discoid object. These pores are cut perpendicular (side views), and chromatin is always on top, cytoplasm is always below. 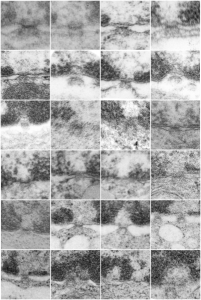 This hepatocyte was from a mouse (#5) which was a 14CoS nujll that did not receive NTBC as a rescue drug. This is 24 hours into the neonatal period.  Nuclear pores have fewer central densities (presumably being proteins transported). I am measuring for distance beside the nuclear pore that the chromatin exclusion zone hoping that differences will show up with various conditions in previous experimental models. 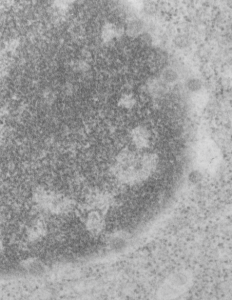 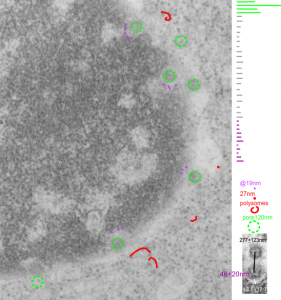 Continuing an evaluation of nuclear pores in various experiments from the past, here is a microgaph from 17709_65053_14CoS-/- NTBC 1yr. I used some of the opportunely sectioned “almost top down” cuts of nuclear pores to look at the inter-pore distance (which here measures , the chromatin exclusion zone, and the distance between the adjacent chromatin areas that have that “beads on a string” look.  Distances are derived from an approximate size of the ribosome at 27nm in diameter, nuclear pore diameter of 120nm, and a 19nm diameter for the adjacent chromatin at the edge of the chromatin exclusion zone.

Unretouched photograph of portion of a nucleus from an hepatocyte from CoS-/- mouse maintained on NTBC for 1 year.  and the marked-up micrograph below. 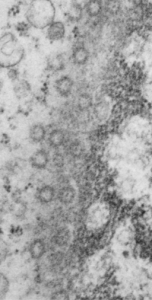 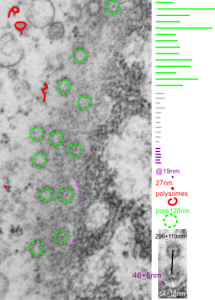 A collection of nuclear pores (top down) from a single tangential section of an hepatocyte nucleus from a mouse +/- for 14CoS (as opposed to the null). These show that about three quarters of the nuclear pores have some kind of transport item (like a pre-ribosome, or something else) being imported or exported all the time.  Just afun look at these adjacent pores. (excuse the morphometry grid from my inkjet printer back in the days when point counting was the method of choice for gathering numerical data from TEM images.

So these from a single cell show something about morphology… and the distance of the heterochromatin exclusion area surrounding the pore and the inter-pore distance and the size of the chromatin “beads on a string” in the adjacent chromatin I posted before. 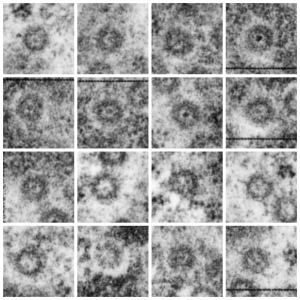 Some measurements, just made for my own information, might be useful in a relative sense to others looking at nucleus, nuclear architecture, and nucleolar architecture. Some data exist of course, but In the dataset that I am putting together from many different experimental protocols (archived) might lead to some new insights on numerical density of nuclear pores during times of cell stress, apoptosis, and in previously studies KO mice.  The numbers are meant to be “observations” and a suggestion.

This particular diagram has as its background  (top image) unretouched, and from a group of micrographs which were used for morphometry (hence the ink jet grid on the surface). It is hepatocyte, from a +/- 14CoS mouse which did receive NTBC (as a control for experimental mice receiving NTBC (data here) but showed pretty normal histology – but I predict with enough time and scrutiny something would show up. Octameric nuclear pores are shown as green dotted circles, ribosomes and polysomes presumably attached to the outer nuclear membrane, red, ribosomes, red = @27 nm diameter, peri-pore chromatin beads diameter, @19-20nm. Condensed chromatin at the inner nuclear membrane is well defined and “wound” in many places as a fibril also, possibly around 20+ nm diameter but longer lengths. About %66 of nuclear pores in this photo have central densities indicating some molecule is in transport one way or the other.

This particular animal had a great tangential section showing a large portion of the nucleus studded with nuclear pores and I used that opportunity to make some measurements on the diameter of the chromatin with beads (@19nm)-on-a-string appearance adjacent to the nuclear pores but outside the chromatin exclusion area around the pores and the distance between those beads (38nm); to measure the width of the chromatin exclusion area at places around the nuclear pores (maybe 2 -5 measurements perpendicular between pore and chromatin, per pore) (60nm+ 7nm and to measure the pore to pore distances as well (n=27, MEAN, 309nm+ 109nm (SD)). 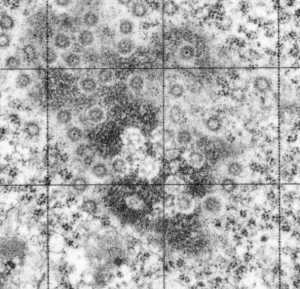 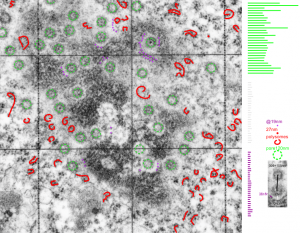 Here is a textureless (or nearly so) grouping of DNA around the periphery of an hepatocyte from a 14CoS ko hepatocyte, from a young mouse not rescued with NTBC.  Symmetry to clumps or peripheral digested DNA is obvious.  There remains some substructure to the “euchromatin” in the nucleus as well as some structure to the areas of presumptive digested chromatin. 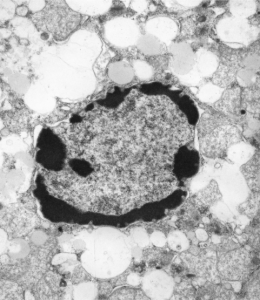 It is remarkable that these little segregated areas of nucleolar constituents look so consistently like “pop ups” that have a predetermined location, density, relative size, and texture.  I don’t believe that it is known what these early blips on the surface of the nucleolus are, (not including the blips that have the substructure notable of cajal bodies) though these may be precursors or similar structures. The banding (linear beads on a string appearance as if wrapped in a ball) in these bodies (by reason of tissue preparation or observer bias –shown in these three micrographs) would not qualify as cajal bodies. So what are they.  The bodies I am speaking of are all pointing upward like little volcanos (especially on the left)  with elements coming or going… whichever haha. Two images on right are slightly more electron dense than the adjacent nucleolar elements.

These images are from scattered micrographs, though two are from 14CoS hepatocytes which had never had or been withdrawn from NTBC.

16040 65718 liver 14Cos 24 hr no NTBC, unidentified cell, not likely an hepatocyte, maybe an interstitial cell. Mitochondria in adjacent cells top left and right have condensed mitochondria.  One of the interesting things about the “inclusion” in this nucleus is that it does not resemble any cytoplasmic structure in the cytoplasm of that cell, in fact the cytoplasm of this cell is quite different with lots of vacuoles (lower left) and an ill-defined shape, on one side very scant cytoplasm, which makes it less likely to be an hepatocyte than an interstitial type cell.

Three areas along the margin of the inclusion have been cut and enlarged (denoted by the three boxes in the original micrograph). The inset at the top shows there is really no distinct double membrane typical of the nucleus (inner and outer membranes and nuclear pores) and this might be a tangential cut-artifact. In the inset from the middle left, theer is a band of chromatin along the left border of the inset but again, no double membrane typical of nucleus. The inset from the lower right abuts up against nucleuplas which is very electron lucent, but along this area there is a density to the inclusion which looks like it might be some kind of lamin proteins.

Another great feature is the constriction appearing in lower middle of the inclusion, densities that look like they might have been some kind of “ring” around part of this structure.

Ribosomes (estimated at 27 nm in diameter from the cytoplasm have been enlarged with the insets (also shown in the original).  Bar is 10x the ribosomal diameter at approximately 270nm.

The inclusion/invagination is full of robosomes and RER membranes (I guess that is what they would be named) with an homogeneous appearance and the vesicles or RER appear to be dilated to about the same uniform degree.

There is a nucleolus just above the inclusion. Animals with genotype undergo a pan-apoptosis among hepatocytes within a few days of birth, this doesn’t look like apoptosis yet, and also doesn’t appear to be an hepatocyte. 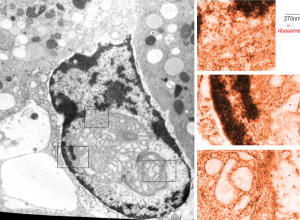